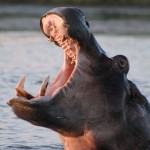 Yesterday ideal conditions prevailed during the first boat safari, numerous Hippo Pods where witnessed, as close as the Jetty from where we depart from. Nile Crocodiles where also witnessed on the banks of the Estuary. The sunset trip once again one of the best times to enjoy a Boat Safari was greeted by an African Sunset.

KZN Ezemvello Wildlife & Isimangaliso Wetlands Park have opened the Black Umfolozi River back into the St Lucia Estuary, this has been done increase the levels of the Estuary. In the begining of the year St Lucia experienced a tropical storm (Irene) down pours where experienced and water levels increased substantially. Certain areas received in access of 600mm in 2 days. Since then the water levels have dropped this is then the reason that the Umfolozi River has been opened to the St Lucia Estuary.

Silt content has been the predominant factor when opening the Umfolozi River into the Estuary, previous years experienced max depths of upto 25 m in certain areas and todate depths range from .5m to 2.5m maximum.

To witness Hippo’s up close remains a must while in the area, Nile Crocodiles frequent the banks and a large variety of Bird Life may also be witnessed.