Nobby Clarke is an accomplished Wildlife photographer who resides in Kwazulu Natal, South Africa. He started his photography with a Pentax MV1 back in the 80’s and progressed to doing his own film developing. There was a break in his photography hoby and in February 2011 his love for photography was rekindled after a visit to the local Game Reserve Imfolozi which is 80km from where he stays in Northern Kwazulu Natal, South Africa He entered quite a number of photographic competitions and won quite a few notables which include the 2012 Ezemvilo Wildlife Photographer of the year, Mazda WIldlife August 2011 and the Rio Tinto bird photography competition water bird category. His monochrome Cheetah image featured in the UK Photoplus Magazine in December 2011. His dragonfly image 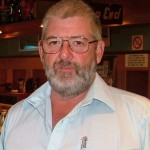 graced the cover of Wild Photo Magazine in July 2012. Nobby was appointed the Clik Elite SA agent for the Kwazulu Natal Region in June 2013. The products are available on the following webpage http://www.clikelite.co.za/

I’ve been really serious about photography since early 2012. The one thing that really drives me is the feeling that life goes by so fast and we don’t see everything that’s there. I have always loved Nature and Wildlife, but must say that Photography has opened my eyes even more, to the beauty that surrounds us. The beauty is there for us all to see, if we would only take the time to look for it, it’s so very precious. I love capturing this beauty, and sharing it with others. This beauty is portrayed in his photography and can bee seen on Nobby’s web page www.nobbysphotography.co.za and Facebook https://www.facebook.com/Photography.by.Nobby Nobby Clarke is a wildlife Photographer and lives in Zululand, his passion and ability to capture the incredible beauty in Hluhluwe Game Reserve deserves applause. I started my photography with a Pentax MV1 back in the 80’s and progressed to doing my own film developing I slowly progressed through the years and photographed a few family weddings, which gave the bride and groom great pleasure when seeing the results of the shoot. In February 2011 my love for photography was rekindled after a visit to our local Game Reserve Imfolosi which is 80km from our home.

Winner Mazda Wildlife August 2011 Runner up Mazda Wildlife July 2011 Winner and third place 2011 Rio Tinto/PMC Bird Photographic Competition water birds wannabe section The following images have been captured in the Hluhluwe Umfolozi Game Reserve. This is a part time obsession of his and we would like to once again thank Nobby for his contribution to this magnificent reserve. Please note that all pictures are for sale should you be interested.