Arrive at King Shaka International Airport, we travel to Drakensburg National Park to our deluxe accommodation (Drakensburg Gardens). Get settled in and meet with guide for orienatation.

Gather for an orientation, check your equipment, and set out on a hike along the lush slopes of Drakensburg, spectacular views. You’ll learn about the plants and animals that inhabit this ecosystem. South Africa’s second World Heritage Site.

A early departure as we set off to Skakland, where our Zulu Culture begins. The set for a local documentry Shaka Zulu was transformed into a real life cultural centre exposing and explaining Zulu customs. Watch the Zulu’s war dance’s, Zulu woman beadwork and meet a Sangoma (Witch Doctor). Overnight in a traditional Zulu Beehive.

A early departure as we travel to St Lucia bordering the Isimangaliso Wetlands Park (South Africa’s first World Heritage Site) We’ll take our time, soaking in the spectacular scenery while enroute. After check in we depart on a Estuary Boat Cruise to see the Hippo’s, Nile Crocodiles, Birds of prey and a lot more, then this evening we depart on a Night Drive to go in search of the elusive Leopards, other animals of interest Buffalo, Rhino, Chameleons and lot more. See and hear the nocturnal wildlife come alive.

Board our 4×4 Open Game Drive Vehicle as you are transfered to Hluhluwe Umfolozi Reserve the oldest proclaimed park in Africa. We follow the gravel road trails past Mpila towards Sontuli keep an eye out for the Big5, Cheetah’s that roam the plains and residant African Wild Dogs, traditional South African barbeque in the bush today. The afternoon witness the glowing  late-afternoon African sunset.

We depart to South Africa’s first World Heritage Site today for a full day naturlist guided tour, experience the wetlands, mangroves, grasslands, marine reserve and the second highest vegetated dunes in the World. Various species of wildlife may be encoutered on this safari so keep an eye out for Leopard, Rhino, Kudu, WaterBuck and a whole lot more. The afternoon is spent on the Indian Ocean beach ( Cape Vidal) enjoy some snorkeling in a protected bay and be amazed by the amount of tropical fish that reside along the reef. The afternoon is spent on a short guided walking trail, experience Buffalo on foot, hippo wallowing and Nile Crocodiles lying about on the banks.

We depart early for the Tembe Elephant Game Reserve by 4×4, looping gravel roads we travel directly to the hot spots to find of the largest remaining Elephants in Africa. Within this unique sand forest and grassland ecosystem roam 200 of the last remaining largest Elphants in the World. The reserve a proclaimed Ivory route between Mozambique and South Africa in days gone by also offers the Big5.

After a leisurely breakfast and an optional morning game drive you depart for the Durban International Airport to continue with your travels.

Price is per person, double occupancy. Airfare is not included. 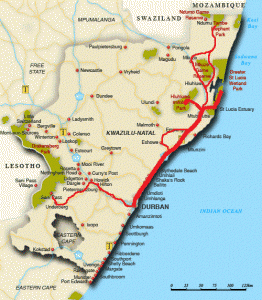