All three of the reedbucks have common features however there are some distinct features that separates each one. The general colour of the reedbuck, in some place of the body, is a reddish-brown colour.  The colour of the coat allows them to camouflage themselves in their habitat which is almost the same colour. They have a head-to-body length of between 100 cm and 136 cm. The female can weigh up to 51 kgs while the male can weigh up to 70 kgs. All males have horns of varying lengths.

The mountain reedbuck is a predominately grey colour, but the head and shoulders are a reddish- brown colour. The underparts are white and the tail has a bushy white underside. The mountain reedbuck has a scent gland which is a round bare patch of black skin, this is located beneath the long, thin ears. The common weight amongst female reedbuck is around 30 kgs while the males are not that much bigger, only weighing around 32 kg. The horn of the male is very short and has a slight forward curve. The length of the horn can, at its shortest, be 13 cm long, and at its longest, 35 cm. 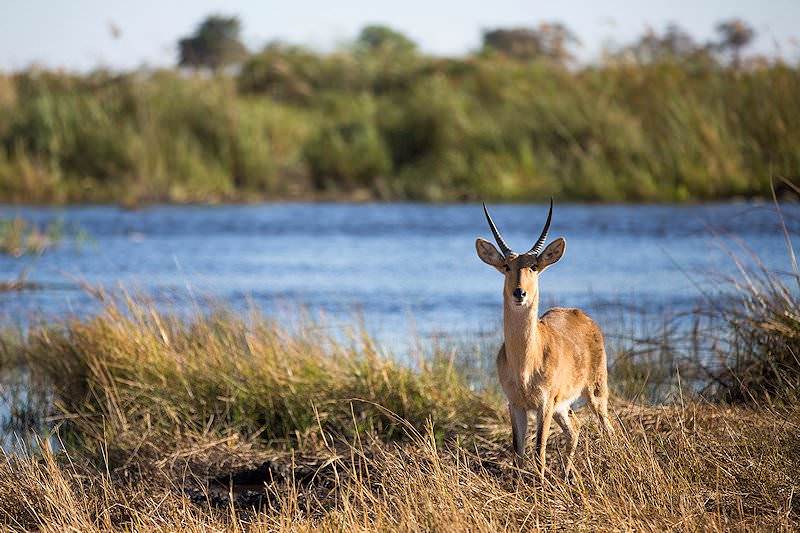 The southern or common reedbuck is the largest of the species. The light- brown or greyish-brown animal has a silky coat and a lighter shade of colour on the neck and chest. The females weigh up to 48 kgs and the males weigh up to 68 kgs. The male’s horn of between 35 cm and 45 cm can be described as being angled outwards curving forward slightly at the tips and growing to be larger than that of mountain reedbucks. The base of the horn has a band of pale and rubbery tissue that is different from the other species.

The bohor has a yellow to greyish brown colour that has been described as being slightly golden. The bohor reedbuck has white undersides. Other distinct markings of the bohor include: a dark stripe on the front of each foreleg and a pale ring of hair around the eyes and along the lips, lower jaw, and upper throat. The males weigh between 43 kg and 65 kg and are distinguished from the females by their thick necks and horns. The horns are short and stout, extending backwards from the forehead before hooking sharply inwards and forwards at the tips. These horns are anything between 25 cm and 35 cm in length. The females are a small 35 kg, reaching a maximum of 45 kgs. 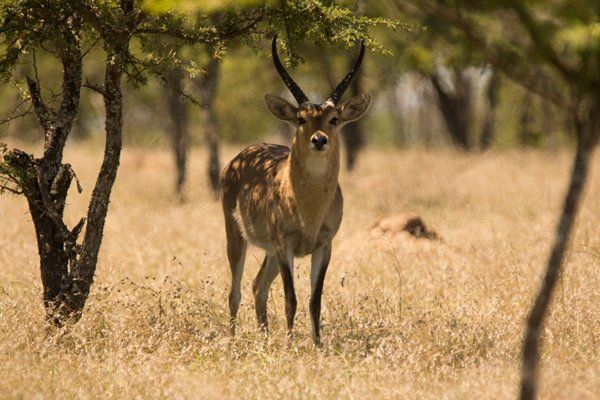 Wet grasslands are the common home environment for the reedbuck. The shrinking of this type of habitat has, in recent years, shrunk at a considerable rate which means that there has been a reduction of the reedbuck in these areas. The reedbuck prefers to inhabit places with water sources although it is not very dependent on water. Its water consumption is limited to very few days, only changing to multiple times a day during the dry season. The southern reedbuck is distributed in the African countries of Gabon, Zambia, Malawi and South Africa, to name a few. The bohor can be found in a whole host of countries including, Democratic Republic of Congo, Ethiopia, Burundi and Togo. The mountain reedbuck, as the names suggests, can also be found on mountainous terrain and slopes. They are common in sub-Saharan African countries such as South Africa but are also distributed in countries such as Cameroon, Nigeria and East Africa.

The reedbuck’s diet is mainly consisted of grass. When no grass is available, they take but small quantities of herbs and seeds.

The reedbuck is a primarily nocturnal animal and is only a bit active throughout the day and night with most of their activities happening around dawn and dusk. The inherently territorial animal is usually grouped in small family units of 6-10 family members. If the group is bigger, it is a temporary phase for either protection or feeding. When female reedbucks reach maturity, they leave their birth family groups to form their own pair bonds. The male reedbuck usually remains with the family until 3 years old but can be forced out of their birth herds before this. This pushing out allows them to form or belong to bachelor groups until they are ready to fight with other rams for mating opportunities. When threatened, they usually remain motionless or retreat slowly into cover, only fleeing once the threat is very close.

Female reedbucks are sexually mature and conceive their first lambs (baby reedbuck) at the age of 15-18 months old. Males are sexually mature after two years. The breeding process can occur through the year; however, it has been studied that births peak during the summer season. The gestation period is between 7-8 months. Lambs hide for up to three months, during the time period they only reveal themselves for nursing which happens every day for 10-30 minutes.