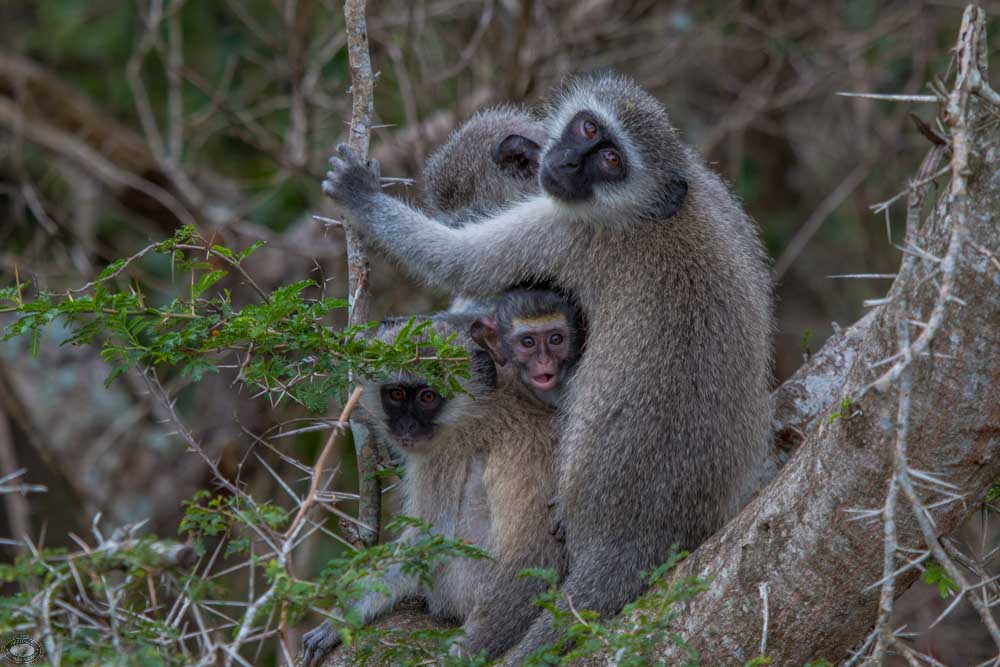 The life expectancy of the vervet monkey is 12 years in the wild, this doubles to 24 years old when placed in captivity.

Vervet monkeys are medium-sized primates with black faces with small white whiskers and black hands and feet. The eyes and eyelids have a white colour. The rest of the body, which is around 40 to 50 cm long for males and around 30 to 40 cm long for females, is a grizzly silvery-grey or olive-green hair colour. The only parts of the vervet monkey that do not have hair are the face, hands and feet. As babies, they do have a different colour with the face being pink and the rest of the body is black. The arms, legs and tail are long and are known to assist the monkey with balancing as they move on the ground between trees and other high reaching natural objects. Vervet monkeys have extremely long teeth, their canines are approximately 3.2 cm from the gum. They also have cheek pouches that they use for storing food.  An interesting and helpful physical aspect is the eyes, the colour vision that the vervet has enables it to differentiate between fruit that is ripe and unripe.

There is not much that distinguishes the male and the female vervet monkey. Adult males weigh between 3.9 kgs and 8 kgs, although records show that the average weight is around 5kgs. The female weighs between 4.4kg and 5.3 kgs. The most noticeable difference between the two is seen through the genitals. The penis of an adult male is red and the scrotum is blue, the colour signals their sexual status. Females have a pair of mammae on their chests - a mammae is a milk-secreting organ.

Vervet monkeys find homes in Southern Africa and East Africa in countries such as Ethiopia, Somalia, Senegal and most popularly, South Africa. Recently they have been introduced to Ascension Island and Cape Verde.  They are highly adaptable and able to inhabit savanna, riverine, coastal forests, mountains and woodlands areas. They can also be found to be living in rural and urban environments.  Water is a very important resource for vervet monkey, this means that the availability of water will determine whether they decide to stay in an area or not. It is very rare to find this type of monkey in areas of open grassland.

These mammals are technically omnivorous; however, studies show that they fall more onto the herbivore spectrum. Their primarily herbivorous diet consists of wild fruit, leaves, grain crops, seeds, flowers, bean crops, peas, young tobacco plants, vegetables. Owing to this type of diet, vervets can destroy agricultural areas. When they do decide to eat some form of meat, they tend to fed on grasshoppers, lizards, and rodents. Vervets will also eat the eggs and chicks of birds. Their food diet is very season dependent, which means their diet can change according to seasonal food availability. 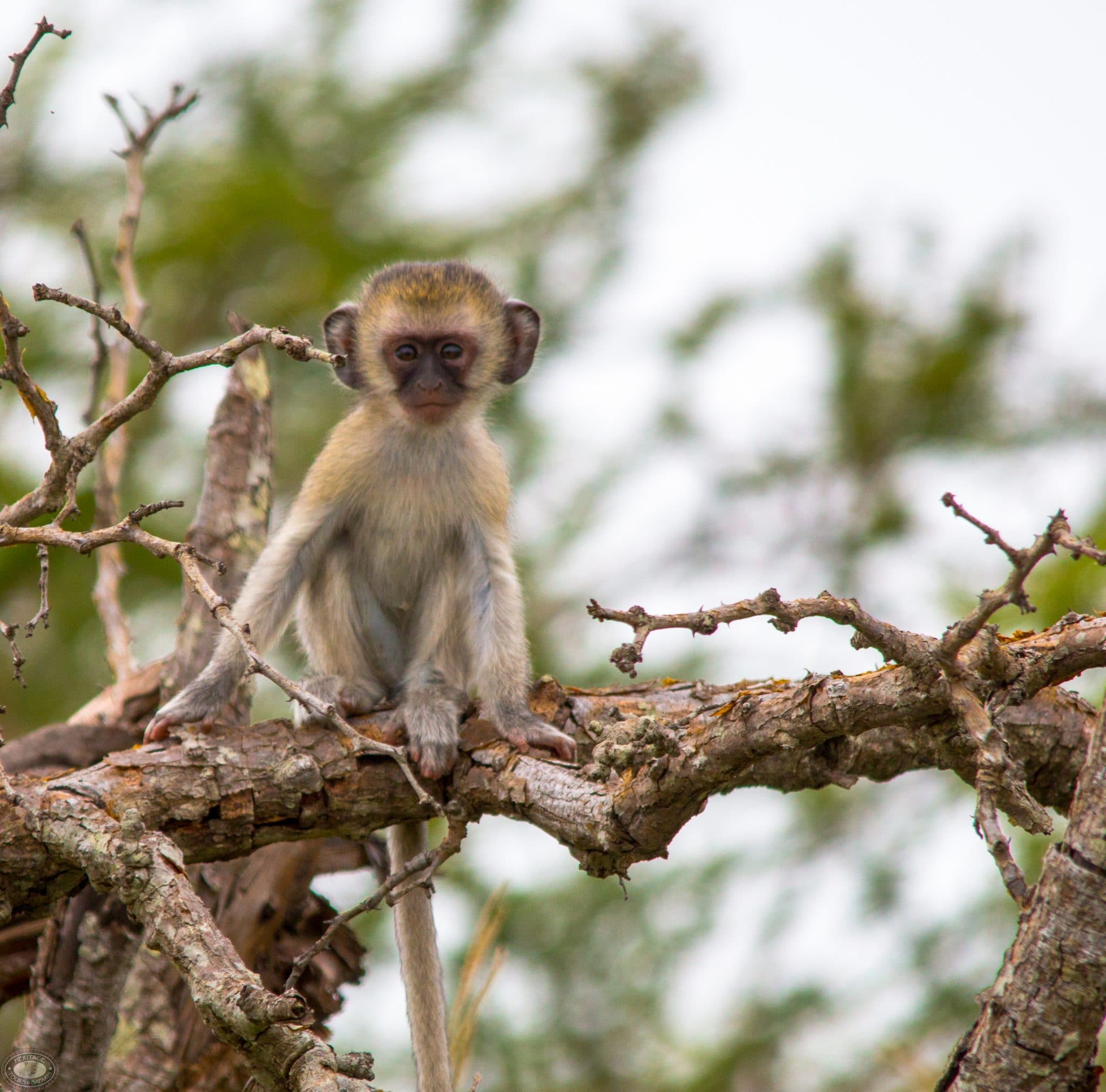 The vervet is a very active animal that moves in well organized, complex social groups of between 10 to 70 monkeys. The social groups are known as troops.  They choose to mainly interact within their groups, especially with those on the same rank as them and/or closely related. These interactions can be friendly or aggressive. The monkey is introduced to the group at birth however only the females remain within their original groups throughout their lifetime. The males often leave and move to other groups once they have reached sexual maturity, usually opting to leave with a sibling or a well-acquainted peer in order to protect themselves from possible aggression faced when they arrive at a new group. Their transfer to a group is usually a neighboring one and is not too far from their birth group.

Siblings within the groups are very important during the development of the vervet monkey. The bond formed between the siblings is very supportive and friendly. This can also when a tense relationship when it comes to competing for time to be groomed by the mother. In order to reduce this tension between the siblings and to allow the mother to have her own time, the vervets make use of a process known as an all mothering. This process involves another female vervet monkey, usually a young female that cannot menstruate, to take care of the infant. The mothering process is therefore considered to be more of a group effort then a singular one. It also helps to prepare younger female vervets for motherhood and allows for the interbirth period to be shorter.

The vervet monkey social groups are also very hierarchical. Each sex has different ways of ways of exerting their dominance. The male structure is largely dependent on age, how long they have been in the group, their ability to fight and the number of friends within the group. The female structure is very different from this as their hierarchy is dependent on the maternal social status.

The mammal is also a very spiteful, competitive and aggressive one. Within the groups, aggression is often asserted on those who are lower on the hierarchy which happens to mainly be those males that are new to the group. Their spiteful nature of often observed by how they tend to destroy food sources of those that they are competing with. Competition is often seen between the unrelated females who compete for grooming partners that belong to high-ranked families.

Calls or sounds are a very important means of communication and identification amongst the vervet. They are approximately over 30 different types of calls that the vervet monkey has. These calls are usually learned from infancy through observation. Certain vocal sounds are made when communicating with one other and other groups are even able to identify which monkey a call is from and who the receipt of that call is meant to be. A call can even be made by an adult male is transferring groups. The calls can be grouped as wanting calls, aggression calls and alarm calls. Wanting calls are usually made by mothers as a call to their infants and are usually of a medium-intensity, while a call from an infant to its child is usually loud. Aggression calls are described as being chattering, while high pitched calls are alarm calls which differ according to the type of predator. An example of differing alarm calls can be illustrated with the short tonal calls made when a leopard is approaching or a high-pitched chatter which indicates the danger of a snake. 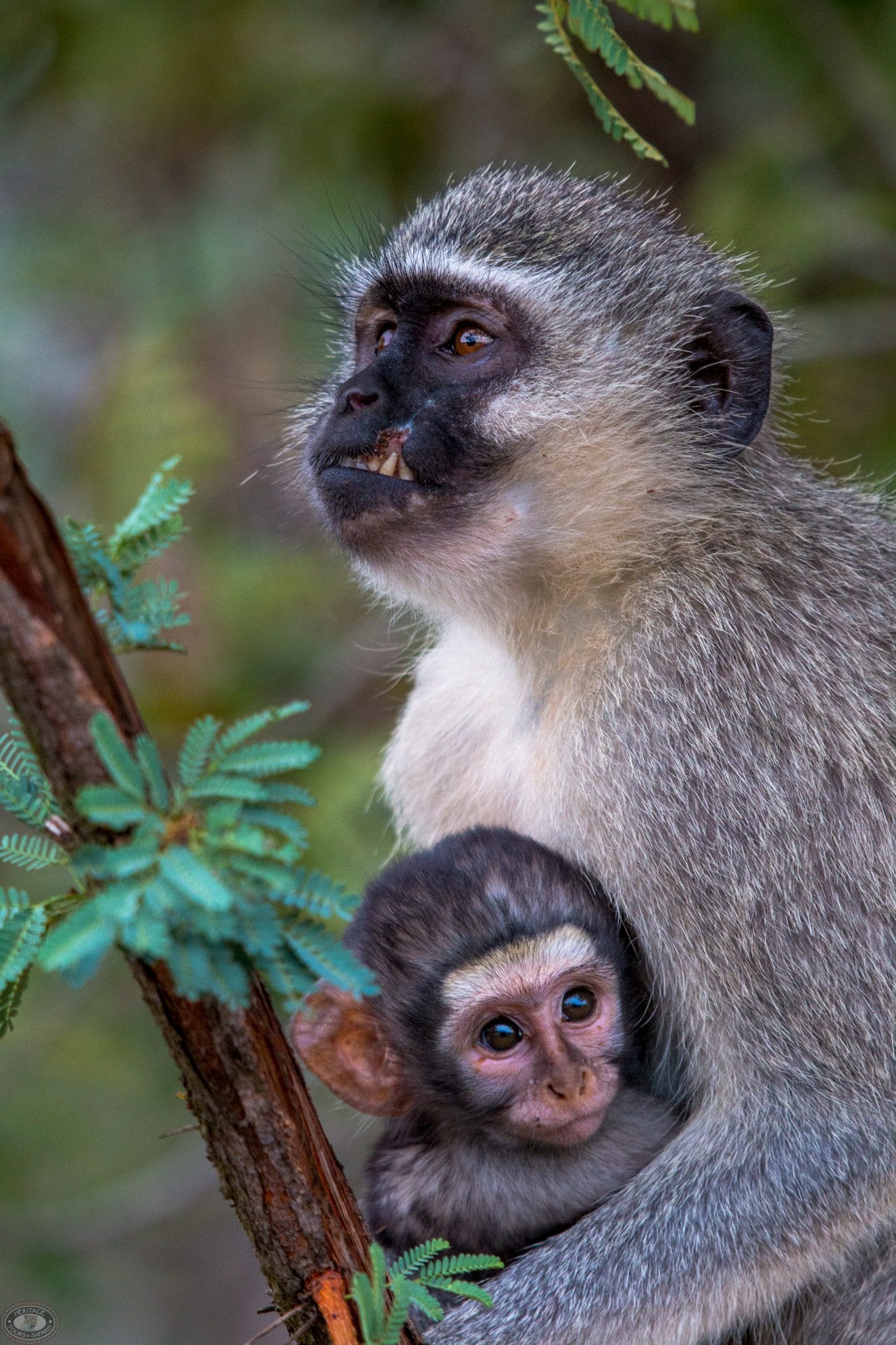 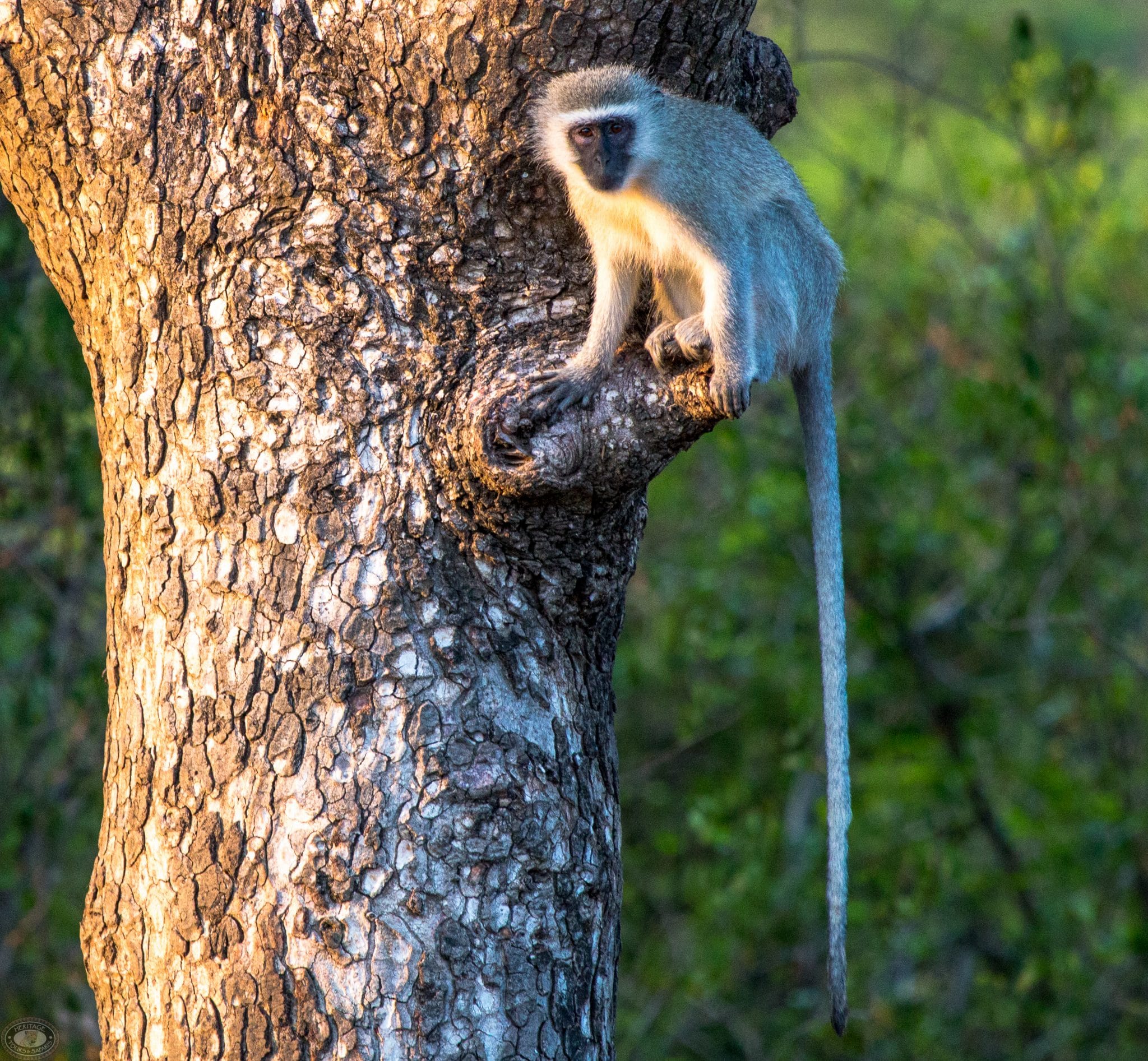 Vervet Monkeys are season breeders which are largely impacted by their geographical region. They are very simple in their breeding behavior in that they do not have a significant action or ritual to symbolize reproduction and breeding.

Females are usually sexually mature from around four years old but only give birth when they are five years old. This is largely due to the fact that males only reach sexual maturity at around five years old which means that the opportunity for mating is postponed until this happens.  The exception has been found in female vervets in captivity who can give birth when they are two years old. The female shows no external signs of menstruating but it's estimated that their reproductive cycle is approximately 32 to 33 days.

The typical gestation period is around 140-165 days. The female gives birth to one infant once a year between the months of February and September, peak birth season is during the months of March and May. The periods between when they give birth can be long as it is largely correlated with the food availability in the region, they find themselves. At birth, the baby vervet monkey is a tiny 300g to 400g in size. During the first week, it is tightly attached to the mother’s belly. The family, especially other females, usually gives the newborn plenty of attention with every member inspecting the infant through touching and sniffing – this assists in building a familiarity when it comes to all mothering. 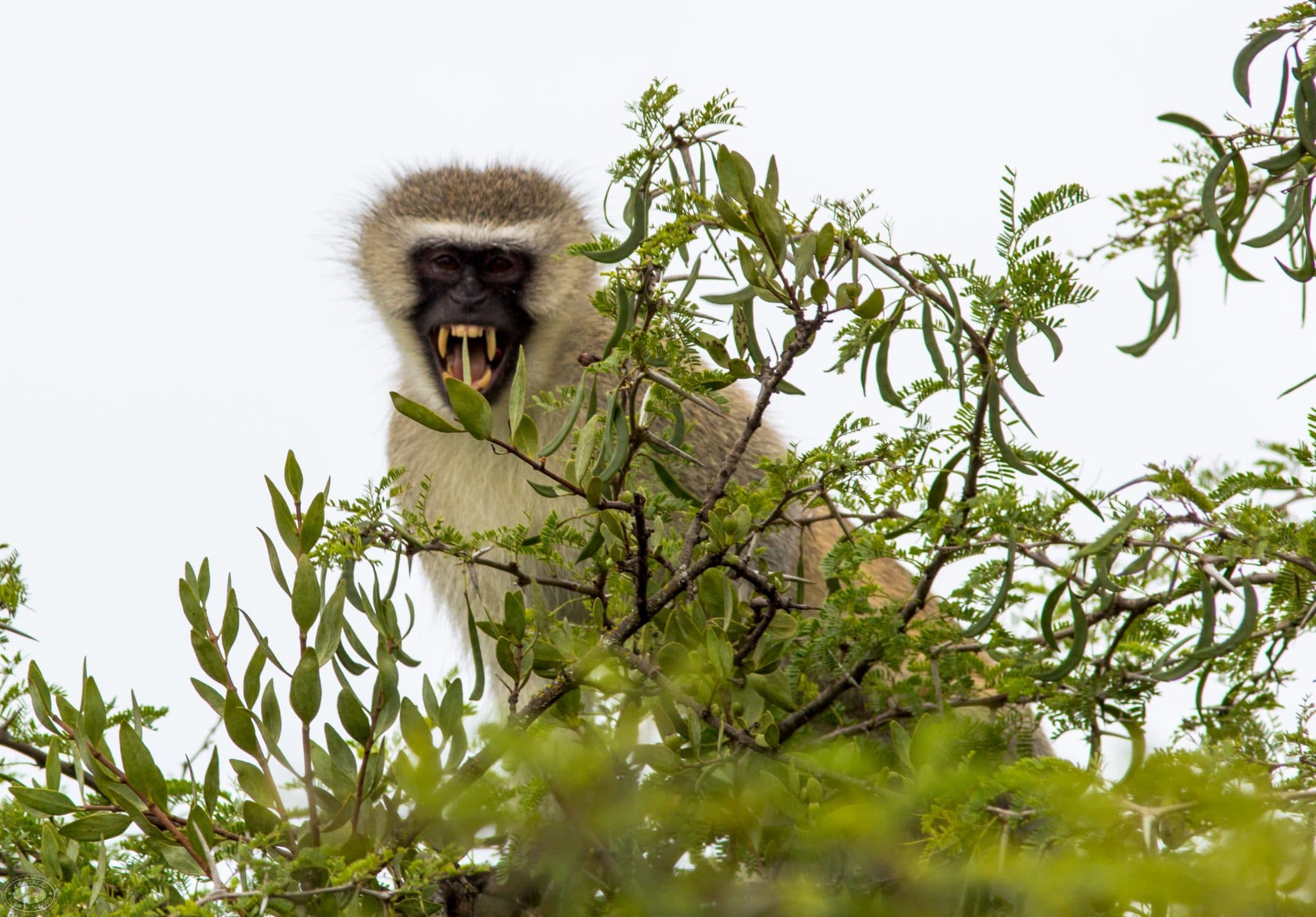 Vervet monkeys have enormous canine teeth which may protrude as much as 3,3 cm from their gums.

They are omnivores (they eat both meat and plants)

They are not dangerous and are not a threat to people. Naughty maybe and will undoubtedly try their luck.

Vervet Monkeys will not really venture far from trees, trees are used as protection from other predators.

They will huddle together and thus their bodies will increase in temperature.

Yes this is a frequent sight and what a lovely sighting it is.