About the amazing and incredible wildlife that surrounds us.

The Kudu family consists of two types of Kudu, the greater kudu which is scientifically known as the Tragelaphus strepsicerios, and the lesser kudu known as the tragelaphus imberis.

The Kudu or koodoo is the Khoisan name given to this type of antelope that forms part of the Bovidae family, a family which includes animals such as the eland, nyala, and bushbuck. It is known to be the largest species of the antelope.

The greater kudu is split further into sub-species based on color, the number of stripes and the length of their horns, these sub-species include the tragelaphus chora and the tragelaphus cottoni. The life expectancy is between 7 to 8 years in the wild, while it can live up to 23 years in captivity.

Calves remain with their mothers for the first 3 to 4 months.

The greater and lesser kudu have similar physical characteristics.  Kudus have a narrow body and long legs. They are identified by their big, round ears and grey-brown or reddish coat and the white or greyish stripes on their flanks. These stripes can differ in shape, pattern and size.

The skin helps them to camouflage in their environment. The long mane of a kudu runs from the back of their heads to the tail, and as well as on the lower part of the neck to the belly. Their faces are formed with white spots on the cheeks and a band that is shaped like a ‘V’. The tail can be anything between 30 and 55 cm.

There is not a big difference between the male and female kudu. The male, also known as a bull, have two twisted, long horns that can reach up to 1.8 metres in length. Some males may also be spotted with two-and-a half horns.

The horns are a dark brown colour with a white tip. The horn only begins to grow when the male reaches between the age of six to 12 months, the twist only starting to come about when they are 2 years old.

They have a shoulder height of 1.4 metres and can weigh anything between 190kg and 300kg. The male can also be identified by their beard or nose markings which their female counterparts don’t have.

The female, also known as a cow, weighs anything between 120 kg and 210 kgs. The cow is known to be hornless, however there have been records of females with very small horns. They have a shoulder height of approximately 1.25 metres. 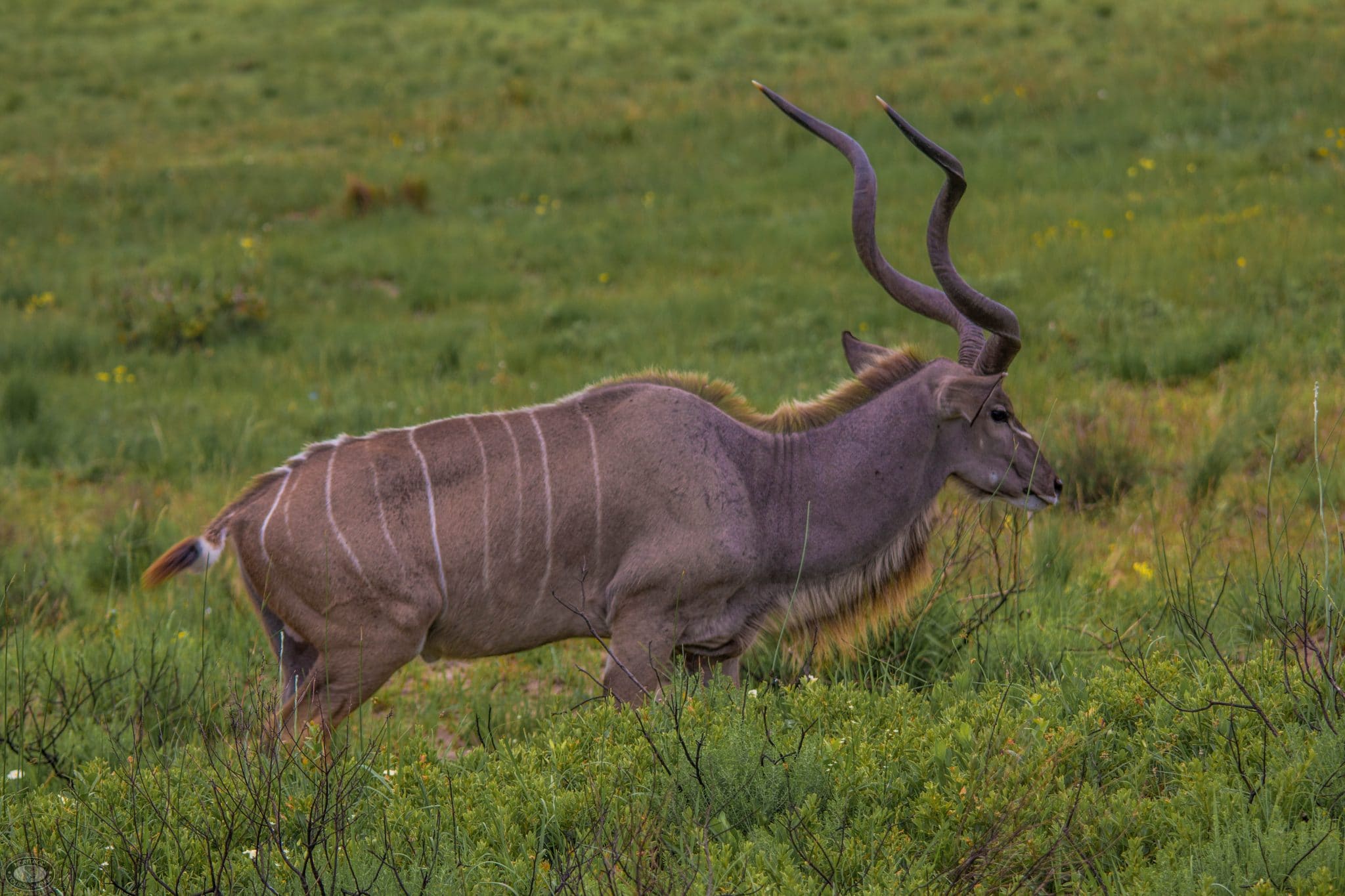 The kudu prefers dense bush on the foothills of mountain regions. Environments with mixed scrub woodland of acacia, commiphora shrubs, and mopane bush are popular kudu spots. The dense scrub and bush enable them to protect themselves from predators. The greater kudu does seem to prefer a rugged hillside environment while the lesser kudu enjoys an environment that is flat, dry and hot. The kudu is very sparsely populated in the areas that they are found because of the declining habitat as a result of deforestation and poaching.

The greater kudu is distributed through Eastern and Southern Africa in countries such as Ethiopia, Tanzania, Kenya, Zambia, Angola, Botswana, Namibia, Zimbabwe, and South Africa. In South Africa,  kudus form part of the game reserves and game farms of the Northern and North-western provinces of the country. The lesser kudu belongs to mainly East Africa in countries such as Uganda, South Sudan, Kenya, Ethiopia, Somalia, and Tanzania. 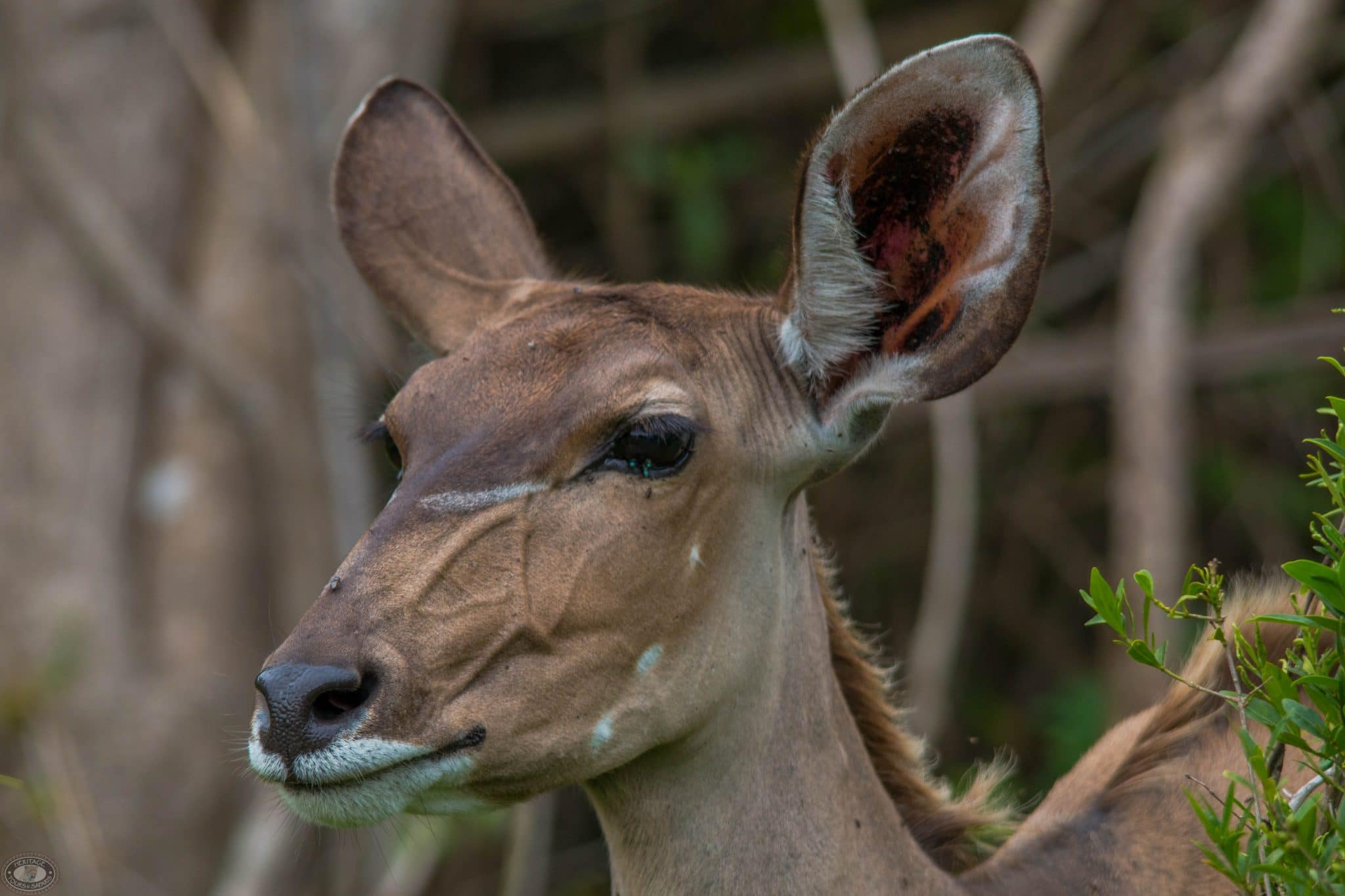 Kudus are herbivores that feed on greens such as trees and shrub leaves. They also enjoy creepers, fruits, vines, tubers, forbs, and flowers. Succulents such as spekboom and aloes may also feature in their diet. The greater kudu is seen as more dependent on water sources compared to the lesser kudu.

Kudus are active for most of the day but are mostly at peak activity at night and at dawn, when they feed and drink. During the day they keep themselves covered by the woodland. Kudus are not territorial animals and do tend to stay in one area. They move in small social herds of made from the cows and their young. A group can consist of between 5 to 20 kudus. The young cows usually stay with their mothers while the bulls prefer to form their own groups when they reach the age of sexual maturity, which is between the ages of 2 and 5 years old. The bull can also go into complete solitary. The male and female groups live in different areas, only coming together when its mating season.

The kudu is a very peaceful animal. The peaceful nature is seen in their reactions when threatened by a predator, in such cases, they would prefer to run away rather than fight. The fight only comes when wounded. The wounded male usually charges and attacks the predator using their horn, preferring to hit it rather than stab its attacker. In most cases, a wounded female would prefer to run, usually not stopping for longer than one minute. Within themselves, the kudu males do like to step outside of their peaceful nature. Males are however known to want to display their dominance within their spaces, although this does not usually last long. A display of dominance is when a male makes his hair stand on end. When faced in competition with each other, usually for a mating partner, the males lock their horns to determine who is stronger. This test between the two males can result in severe consequences, sometimes they are unable to unlock their horns which means they are unable to fend from themselves thus resulting in death because of starvation and/or dehydration.

At the age of two, the male is able to conceive. Mating begins with a ritual in which the male attempts to court the female by standing in front of her and neck wrestling with her. Afterwards,  he issues a low-pitched sound while trailing her. This continues until she allows him to copulate with him. Mating season happens according to the region and climate, but it's common for it to be at the end of the rainy season. The gestation period is between 7 and 9 months. Calves are commonly born, in South Africa, during the months of January and February when its late summer and the grass is high. Mother usually give birth to one calf, however, there have been rare instance where two have been born.

Calves usually weigh approximately 16 kgs. For the first 4 to 6 weeks after birth, the calves are hidden and only visited by the mother when its time for nursing.  For the first 3 to 4 months, the calf remains with mother, only leaving at around 6 months old to live independently in their own groups. 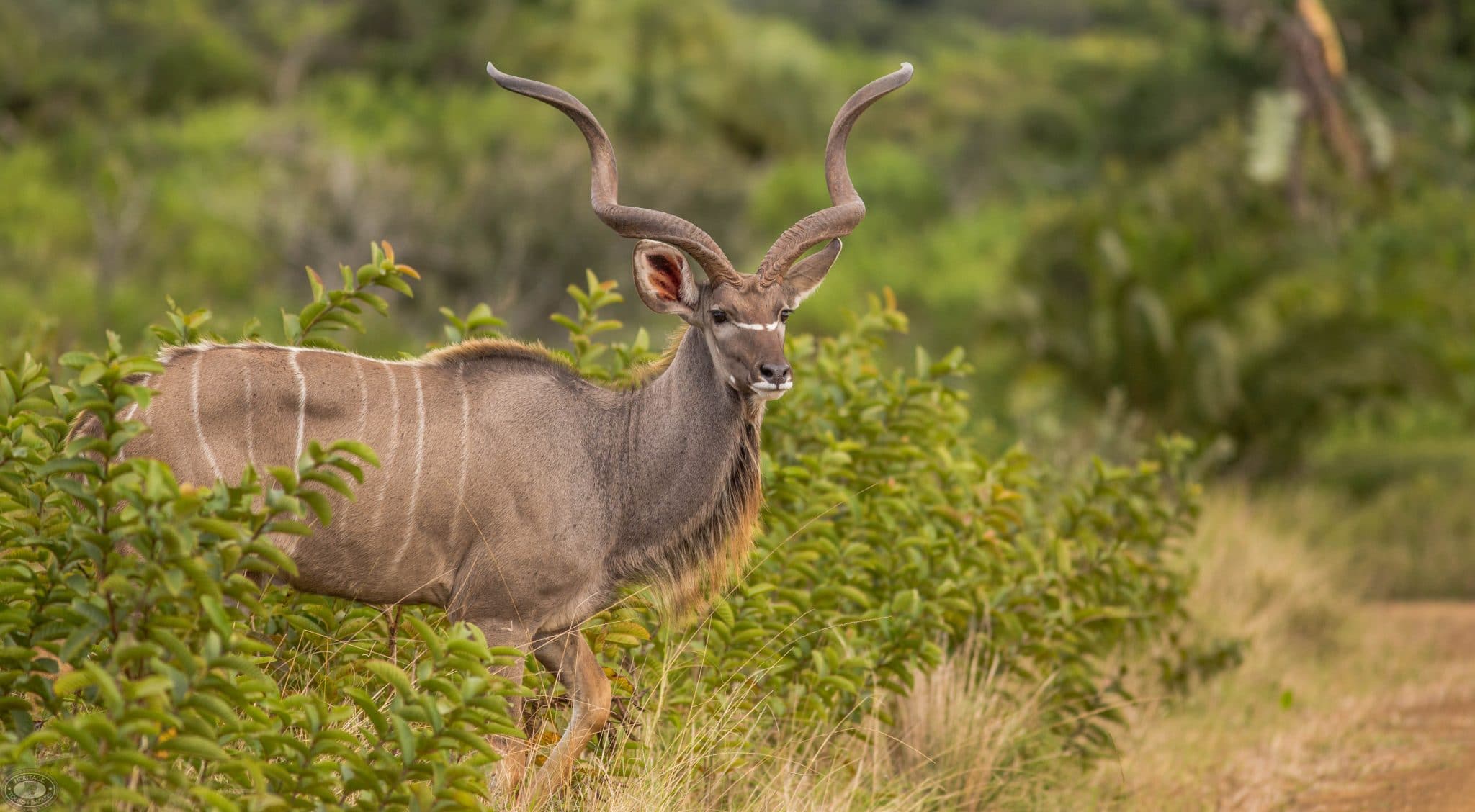 Hluhluwe-Imfolozi Park and the iSimangaliso Wetland Park both offer some magnificent sightings of Kudus, be patient and drive slowly. They are majestic and amazing.