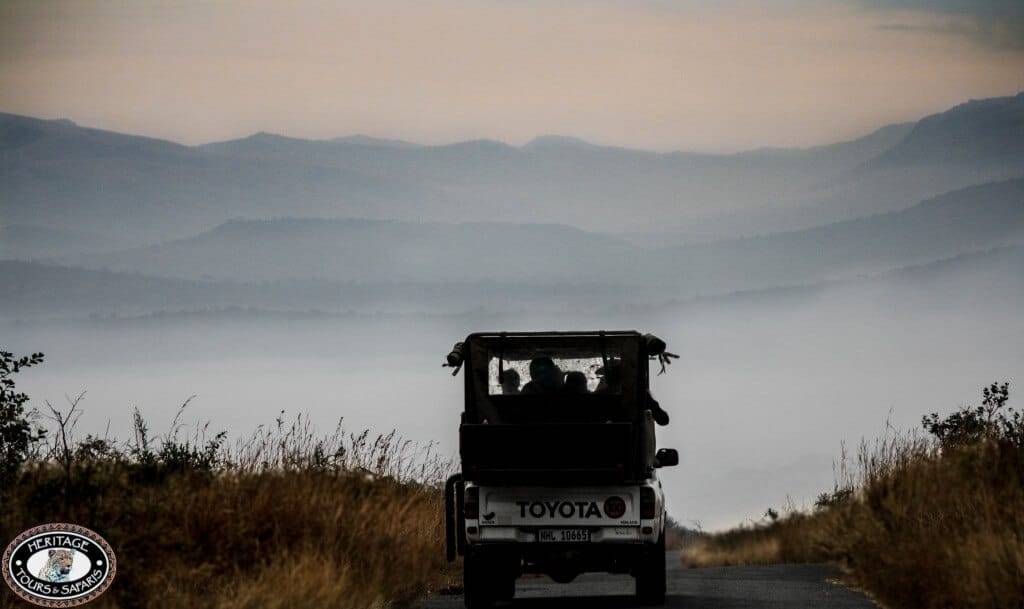 The plains of southern Africa were the domain of the great herds of game, which were attended by Lion, Leopard, cheetah and other predators. Within three hundred years of the arrival of Europeans at the south western-tip of the continent and their subsequent penetration northward and eastward into the land’s interior, the migratory herds have all but dissapeared. Many fell to the gun and those that survived where pushed into what was then considered to be the wilder areas to the north and east. These were then somewhat inhospitable due to malaria and tsetse flies causing disease. Towards the end of the nineteenth century the concept came about for conserving and protecting the last remaining fauna and flora in game and nature reserves.

Natal or kwa-Zulu Natal as we know it today has a proud history of conservation and proclaimed three reserves – the Umfolozi Game Reserve otherwise known as the (Imfolozi Game Park), Hluhluwe Game Reserve and St. Lucia game reserves in 1895 otherwise known as iSimangaliso Wetland Park, which still remains Africa’s oldest surviving conservation areas. Today the Umfolozi and Hluhluwe complex is known as the Hluhluwe-iMfolozi park or HiP.

The Hluhluwe-iMfolozi park gained infamy for the role it played in saving the southern White Rhino from extinction. In the past the area has seen a great deal of slaughter, once serving as the hunting domain for the Zulu Royal House, King Shaka Zulu proclaimed the area as his personal hunting grounds. Once a year Shaka Zulu would have his young warriors chase vast numbers of game into the funnel created by the confluence of the Black and White Umfolozi rivers. Carefully constructed hunting pits would trap animals so the young warriors, eager to prove their bravery, could spear them. Scores of animals were killed in this fashion and some would speculate that Shaka intentionally did this to reduce food sources for neighboring tribes in order to reduce the strength of their armies.

In the mid 1800’s the area was penetrated by white ivory hunters in search of valuable animal products such as Elephant ivory, animal skins and Rhino horns for trade, collection purposes. This uncontrolled plunder of animals lead to the belief that the White Rhino was extinct by the late 1890’s. It was only until a hunter looking for Black Rhino at the confluence of the Black and White Umfolozi Rivers shot and killed two White Rhinos that the governor of the Colony of Natal proclaimed the three major game reserves shortly after this event. Although the hunters contributed little to the management of the area they did however contribute comprehensive lists of animals and species found in the area. 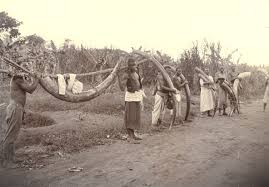 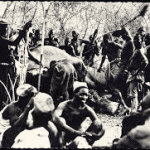 About two decades later came the next hurdle in the road for the animals in the area, this time not from hunters but rather farmers in the surrounding area, more specifically cattle farmers. Drought conditions in 1919 forced game and cattle into contact and an outbreak of nagana occurred. Nagana is a disease affecting hoofed animals and to prevent the spread of the disease many thousand head of game were shot. This was called the Nagana campaign and lasted until 1954 with devastating effects on animal numbers. It was believed that game species acted as the reservoir for the blood parasite but the disease was actually being spread by the tsetse fly. Studies on the fly revealed it to be the true vector of the disease and programs where implemented to remove the tsetse flies by trapping them but the final eradication of the fly was achieved with large scale spraying of the insecticide DDT. 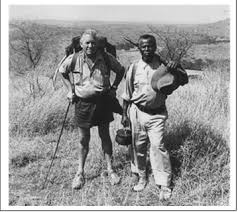 Only the Rhinos were spared in this campaign but the shooting of many thousands of animals meant some species were no longer present in the reserve and had to be reintroduced, these included Cheetah, Giraffe and later Elephants and African Wild Dog. There is a well known story told of a Lion named “Nkosi”(meaning chief) that made his way down from Mozambique to the iMfolozi in the late 1950’s. His route took him through numerous farmlands and occupied areas which obviously roused the attention of hunters in the area. As word began to spread about this mystery Lion’s movements and whereabouts, two well known figures in the history of conservation named Nick Steele and the late Dr. Ian Player knew something had to be done to protect this animal as it may eventually make it to the iMfolozi. They started spreading false information regarding the location and movements of the Lion in the hopes of putting the hunters off its trail. In 1958 the infamous Lion was spotted by game scouts in the reserve and so the first Lion was back in the reserve. Later more Lionesses were introduced and the legacy of Nkosi lives on in the Lions we see in the park today. The only known photo of Nkosi taken by Nick Steele now hangs framed to the wall of the Goyeni Bush lodge in the iMfolozi section of the park. 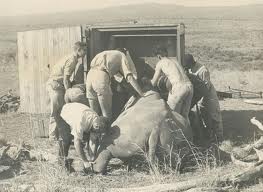 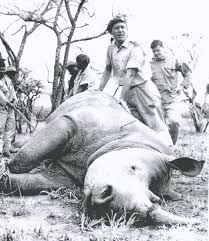 Undoubtedly the major success of the Hluhluwe iMfolozi was in the 1960’s with a program named ” Operation Rhino” which saw White Rhinos from the area being translocated to different game reserves and zoos throughout the world. This was done to reintroduce the Rhino back to their original occurring areas as well as to prevent an over population in the Hluhluwe iMfolozi area. There was a lot the be learned on how to capture and move these massive herbivores and the operation came with many trails and errors. Eventually the development of new tranquilizing drugs and better game capture techniques have made this one of the greatest conservation feats of the century. Thanks to a few far sighted conservationists, the Southern White Rhino was saved from extinction. 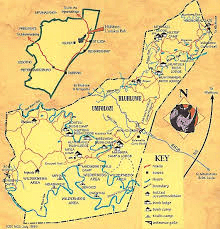 The Hluhluwe Game Reserve covers an area of 23 067ha (hectares) when proclaimed in 1895. It is now linked to the iMfolozi reserve to the south via a wide corridor of land which allows free movement of animals between the once separate reserves. Hluhluwe consists mainly of steep wooded hills, grass covered slopes and riverine woodland lining the Hluhluwe River and other streams found in the reserve. This section has ample water and is great for viewing animals such as Elephant, White Rhino and Buffalo. Predators such as Lion, Wild Dogs and Cheetah are present but difficult to find. The lush ravine areas support a great variety of bird life with over 350 species recorded. The bush becomes very lush during the summer and game viewing is best done early in the morning and late afternoon, best avoiding soaring midday temperatures. Best game viewing is in the drier winter months from May to September.

Entrance to the Hluhluwe section is through the memorial gate to the North close to the town of Hluhluwe a mere 13km away. Facilities include a vast network of self-drive game viewing routes, picnic areas such as Maphumulo with great game viewing opportunities while enjoying a picnic as well as the luxury accommodation at the Hilltop camp. This area is probably the most scenic with great vistas of the rolling hills of Zululand. Access to the iMfolozi in the South is gained by driving through the central corridor reserve which joined the two reserves together in 1989, the grass covered hills of the Seme section is great for viewing White Rhino and giraffe and Buffalo. 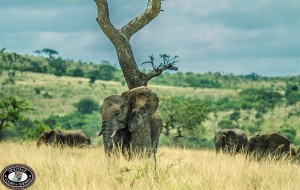 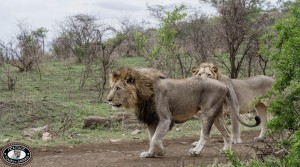 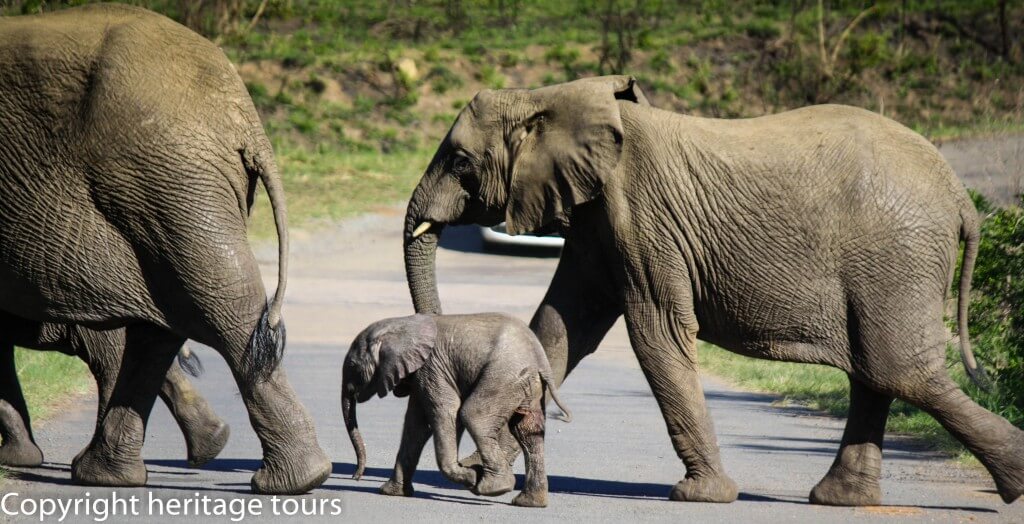 Much of the Umfolozi Game Reserves 47 753 ha consists of hilly country with level floodplains along the Black and White Mfolozi rivers. Savanna woodland interspersed with open areas of grassland cover large parts and annual burns are done to clear bush and open up more areas for grazing animals. The once fine riverine forest and large fig trees lining the Mfolozi Rivers were largely destroyed during the floods of cyclone Demoina in 1984.

The iMfolozi is better known for its great game viewing opportunities, with a variety of different habitats supporting numerous Lion prides, Wild Dog packs, Cheetah and Leopard in this section. The open grasslands and thickets support large numbers of White Rhino, Black Rhino in smaller numbers as well as other large herbivores such as Elephant and different antelope species.

Dry winter months are best for game viewing when animals congregating around the Mfolozi rivers, routes such as the Sontuli loop and areas surrounding the Black Mfolozi river are very productive, game viewing hides such as Bhejane hide are great in the drier periods as water is supplied to the animals. Summer temperatures soar above 38 degrees Celsius and game viewing is best done in the cooler parts of the day, but widespread waterholes and mudwallows created by summer rains mean animals are more widespread and creates an equal chance of finding animals all over the reserve.

A large section to the South of the iMfolozi features one of Africa’s oldest proclaimed wilderness areas, completely undeveloped and inaccessible to tourists this area holds a true sense of what the African bush represents. Wilderness trails are lead in the winter months from May to November where an experienced game ranger will guide small walking parties into the area for a soul reviving wilderness experience.

The Centenary Centre situated in the eastern section of the iMfolozi offers visitors an educational facility to learn about the successful history of game capture and relocation in the park. More than 5000 animals are relocated every year from Hluhluwe iMfolozi, adding major importance to South Africas wildlife industry. The centre incorporates a audio visual hall, Rhino museum and information centre as well as Rhino bomas and animal pens open to the public to view animals in transit to their new homes. A fast food restaurant and curio stalls are also available at the centre.

Entrance to the reserve is gained via two gates, the Nyalazi gate on the R618 from Matubatuba, which enters close to the corridor section at iMfolozi’s north end. The Cengeni gate is situated far to the south via the town of Ulundi. Inside facilities include Mpila camp, the main rest camp with accommodation and picnic areas as well as three bush lodges situated in different parts of the reserve. Self guided game routes span throughout the reserve with three picnic areas equipped with braai stands.

The Hluhluwe iMfolozi park certainly has a rich history and surviving still as one of Africas oldest conservation areas is a must visit for any wildlife enthusiast or naturalist. We hope that this park will have many more decades of success stories in protecting our natural heritage.

Heritage Tours & Safaris is a safari specialist company based in St Lucia, the company offers a wide variety of safari excursions as well as overnight safari packages to the area. Departing daily the company invites you to discover this magnificent reserve while on Safari, enjoy and sit back while your ranger takes you to the most splendid areas within the reserve with a chance of witnessing the Big5, Cheetah and Wild Dog just to mention but a few of the possible sightings while out on Safari.