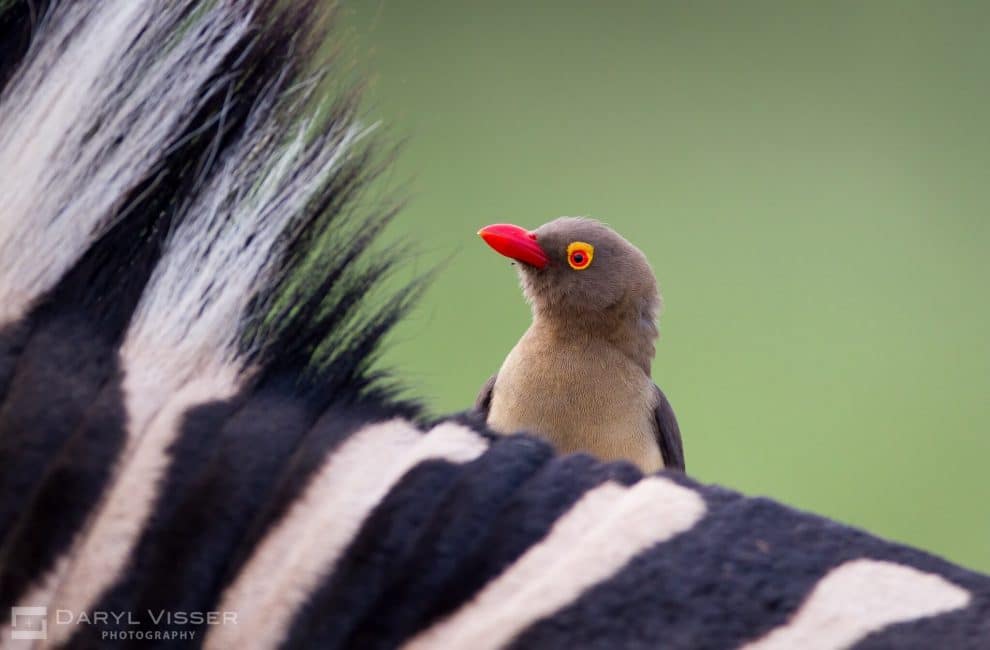 In the African bush there are many types of animals and birds, ranging from big to small they all form part of one complex web of interrelationships, either being on one another’s diet in a very complex food chain or perhaps form part of a symbiosis between species. Symbiosis derived from the Greek word for ‘living together’ essentially refers to a long term interaction between different biological organisms. In laymen’s terms it means that there is some form of relationship between two species that is either beneficial or parasitic by nature.

Of all the interrelationships we witness between animals out on safari there is one that is most commonly seen, and that is of the Oxpecker bird and its large mammalian hosts. Oxpeckers, of which there are two local species, live in association with many species of herbivores, ranging from small Warthogs and Impalas, to the big Giraffes, Buffalo and Rhinos. These birds spend their daylight hours picking and consuming parasites out of the pelage of their hosts in a win-win relationship known as mutualistic symbiosis. Both species involved gain several advantages from their relationship. 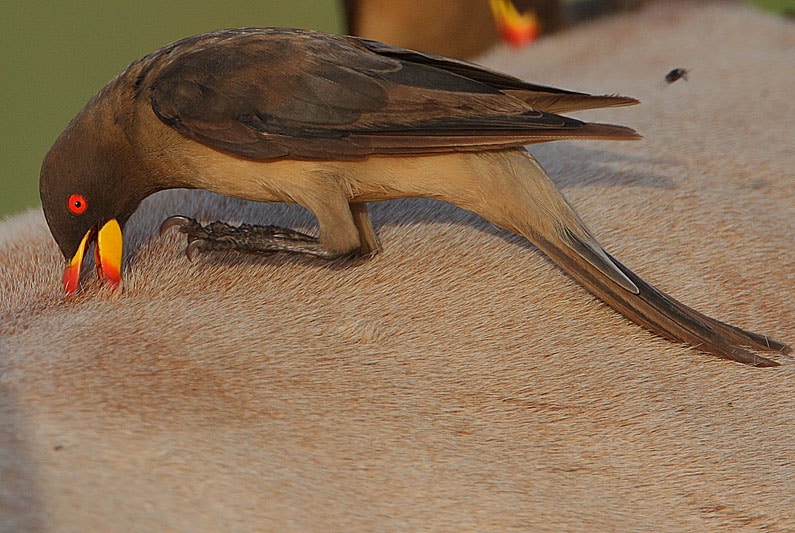 Herbivores benefit greatly by having their bodies cleaned from parasitic, bloodsucking invertebrates. Blood loss due to parasites results in a loss of energy for the animal and puts it at a disadvantage when it comes to avoiding predators, mating fitness or general a day to day activities. Oxpeckers do not remove all the ticks on an individual as there could be thousands on a big animal, but they control the infestations to a large degree and prevent the over spill of high loads to the environment. The Oxpeckers have thus adapted to occupy a niche where food in the form of ecto-parasites is readily available without competition. 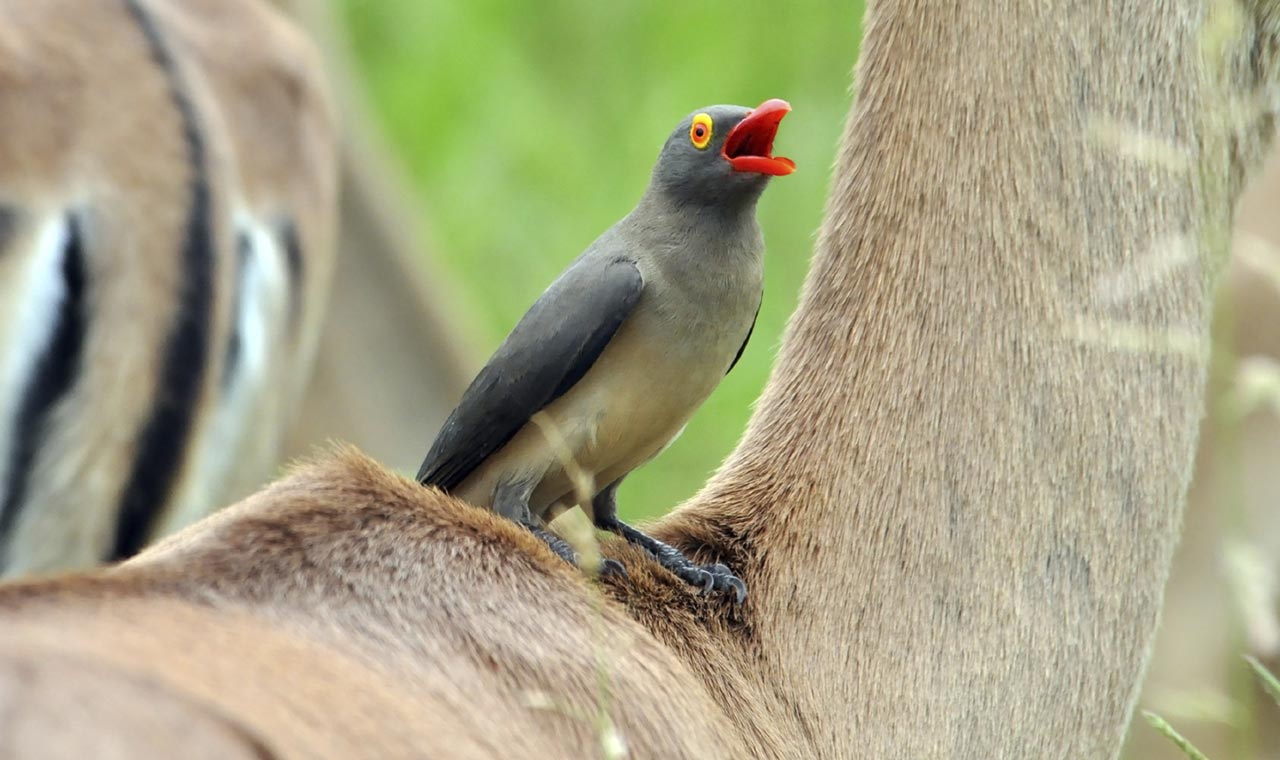 The Oxpeckers also benefit their mammalian hosts by affording them an early warning system. Birds are usually more vigilant than most big animals and when startled they fly up noisily, hissing and rasping characteristically. This usually causes the animal to look up and respond to a potential threat. This also serves a double purpose of warning humans of a potential encounter with a dangerous animal such as a Buffalo. By watching where Oxpeckers fly up or descend with their easily recognizable rasping call, one could be warned of the presence of a potentially dangerous animal. 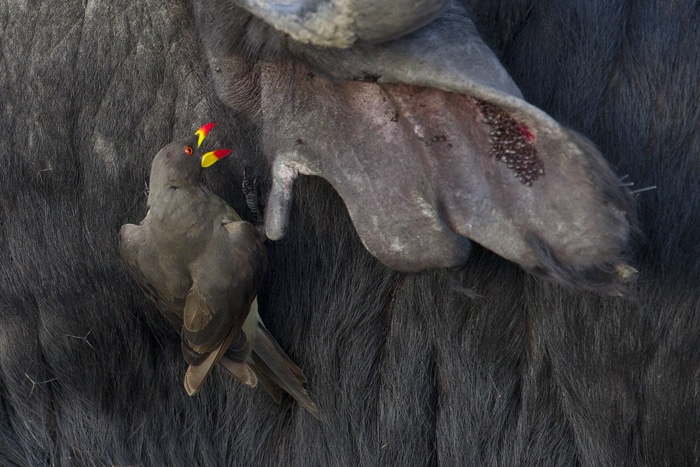 For the most part the relationship between Oxpeckers and herbivores is mutually beneficial, but sometimes it can verge on parasitism. They may often irritate the edges of healing wounds or peck open surface irregularities caused by skin parasites. By doing this they may keep wounds open and susceptible to secondary infections.

Oxpeckers have short legs and very sharp claws which help the birds cling to the fur of an animal as they forage for parasites. They also have specially adapted tail feathers that are stiffened and act in the manner of a tripod to help prop the bird up against the bodies of their hosts as they feed. Their laterally compressed and pointed bill acts like a comb, systematically moving through the fur to locate widely dispersed prey items by opening and closing the mandibles in cycles called ‘scisoring’. They are also known to sometimes hawk flying insects close to the mammal they are on.

Oxpeckers are cooperative breeders with only one pair in the group of 5 or so birds, that actually courts and breeds. Nesting is done in cavities of dead trees that are usually approved by the entire group. The nests are lined with hair plucked from their animal hosts that is placed on grass in a cup like form which becomes flattened over time. Cracks in the walls of the cavity are sealed with dung from their hosts. Only the dominant pair incubates the eggs but the others in the group known as the ‘helpers’ help to feed the brood and remove tell-tale signs of the nest like eggshells and faecal sacs. Many from the helpers are offspring from previous broods.

Oxpeckers usually stay clear of primates and carnivores for obvious reasons. The also do not occur on elephants, probably because elephants will not tolerate them, using their tail, trunk or ears to chase them away. In any case, elephants do not support many ecto-parasites , possibly because they lack sebaceous glands that produce sebum, known to attract ticks in particular.

Oxpeckers were once numerous in South Africa. An increase in the hunting of Big 5 game species and an outbreak of Rinderpest in the early 1900s severely affected the numbers of their host species, such as rhino and buffalo. With the increasing use of cattle dips containing arsenic, leading to the death of Oxpeckers feeding on dipped cattle, their numbers declined even further. Currently, the use of dips that contain organophosphates and home brews (where farmers mix chemicals to make their own home-made dips) is the main reason for the loss of Oxpeckers.

Oxpecker populations will continue to decline as a result of the use of incompatible ecto-parasiticides. Oxpeckers also damage livestock and game species through the aggravation of wounds when tick loads are low to supplement their diets, causing conflict with livestock and game farmers. Thus there should be a continual effort to work with farmers towards finding solutions to these problems. In some cases, this involves removing Oxpeckers from areas where they are numerous and relocating them to areas within their historic range where they no longer occur.

So be on the lookout for these  little birds on your next trip into the wild and enjoy not only the animals that play host to these birds but also catch the antics of these brave little birds that courageously ride on the backs of giants. 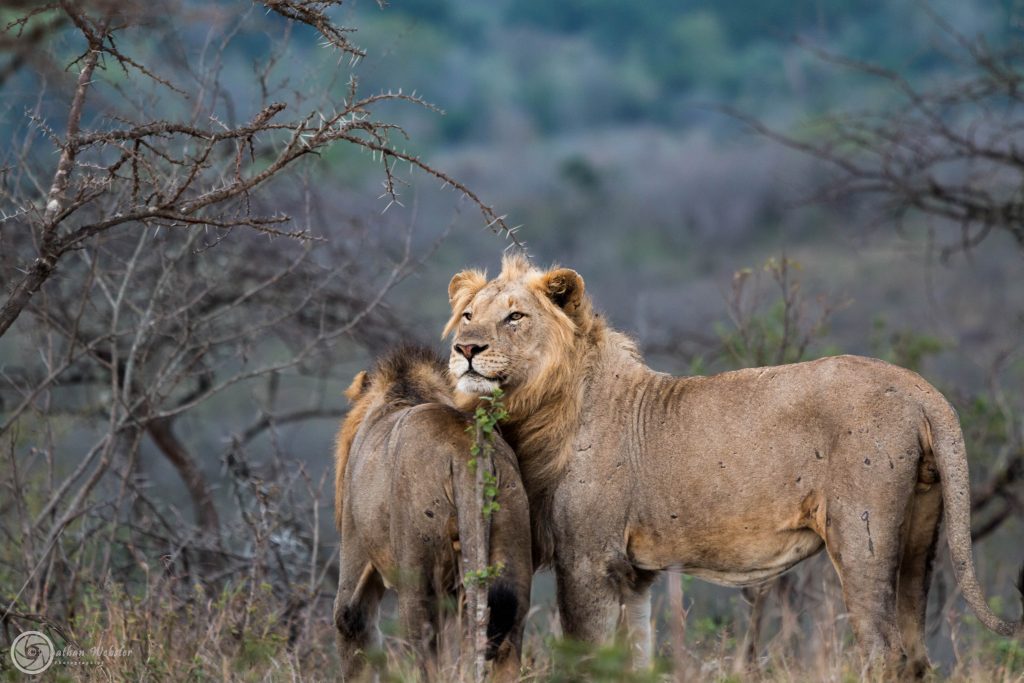