The Bornean orangutan has a lifespan of between 35 and 45 years when in its natural habitat. This lifespan nearly doubles to approximately 60 years when they are held in captivity. 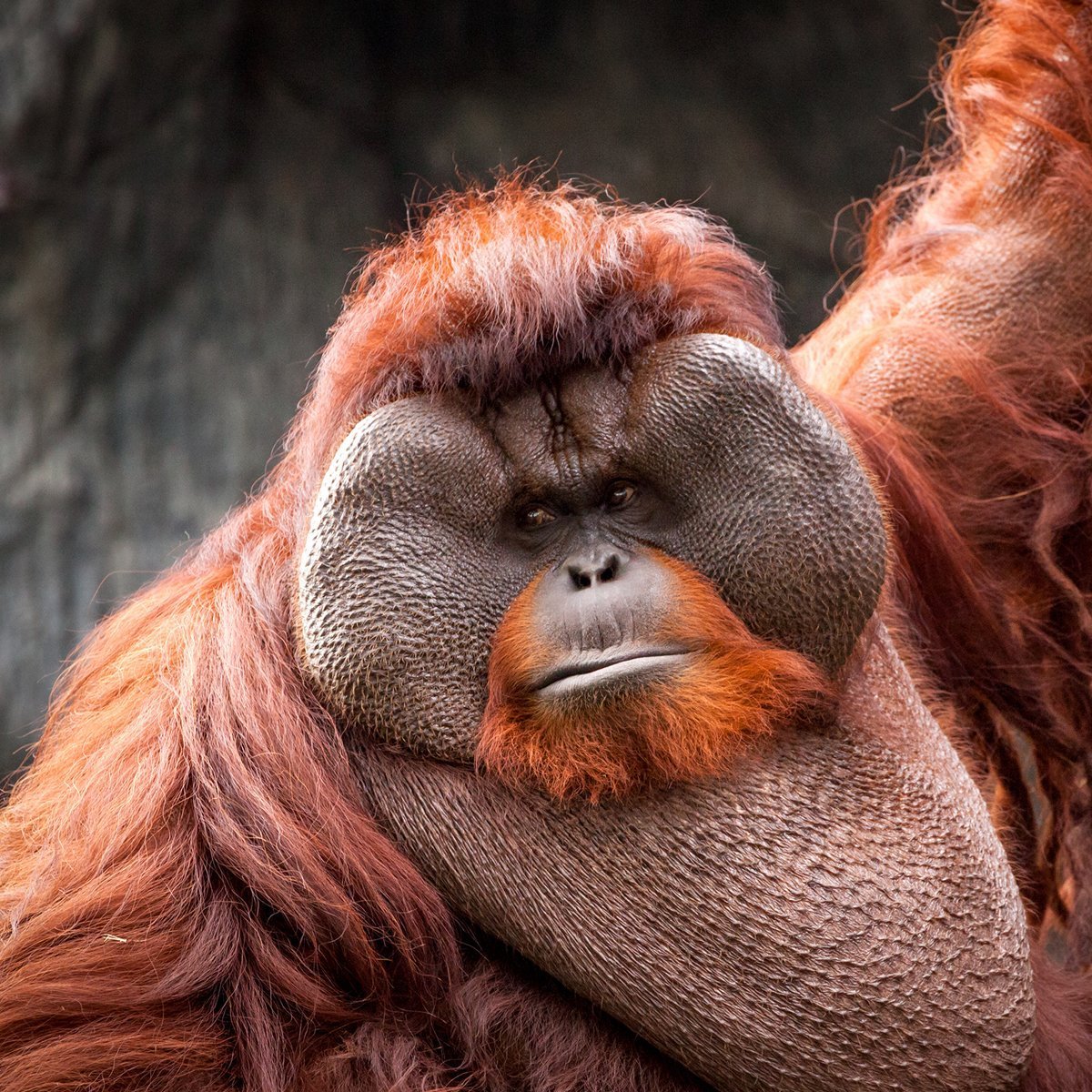 The orangutan is identified by its grey or black skin that is covered by a shaggy, dark, rough, red-orange coat. The coat covers the whole body except for its wide face which is hairless. They also have big, thick cheek pads on their faces known as flanges – the size of this differs between the two genders and even more so between the males themselves.  The most distinctive body feature is the long arms that belong to the Bornean orangutan, the arms are known to reach up to 1.5 meters in length. These long arms play an important role in their movements and assist them with grabbing food or tools. The legs also around the same length. The Bornean orangutan is the third heaviest living primate (after two gorilla species) and the largest tree-dwelling (or arboreal) animal. Bornean orangutans also have flat teeth. An important characteristic of the Bornean orangutan is their eyes which allow them to have binocular vision and detect what is around them. They rely more on their sight because of their limited sense of smell.

Males and female have significant differences. Firstly, although they do not have hair on their faces, the male can be seen to have some hair on the face in the form of the beard and mustache. The Bornean orangutan male is also significantly larger than the female. Weighing between 50kg and 100kg (the average male being 75kg), it is also between 1.2 meters and 1.4 meters in length. The female Bornean orangutan is half the male’s weight with a size of between 30 kg and 50kg (the average female being 38.5 kg) and it is usually been 1 meter and 1.2 meters in length. It has been recorded that being in captivity not only influences the lifespan, it can also influence the weight to reach anything above and around 165kgs. The throat sac, canines, and premolars of the male are also larger than those of the female. The throat sac is especially important for the male as it enables him to make deep, resonating calls during the mating season.

The physical appearance of the adult male can also differ. This difference is seen through the flanges mentioned earlier. This creates two categories of males: flanged males and unflanged males.  Flanged males have larger, protruding and fleshier cheek pads on both sides of their faces and a larger throat sac, while the unflanged males have smaller ones (similar to the female). The physical feature will most likely be evident when the male reaches his early 20s, if this stage passes without the cheek pads becoming larger, it is most likely that the orangutan will remain unflanged. This physical distinction is important as the flanged males are known to have longer vocalizations. The appearance makes the flanged male more attractive to the female and more dominant.

The orangutan species can be found in lowland rainforests, tropical and subtropical broadleaf forests, swamps and mountain forests. They prefer to be approximately 1.500 meters above sea level.  They move into other areas or forests when looking for fruit-bearing trees. The two countries to find the Bornean orangutans are Malaysia and Indonesia. In Malaysia, they are located in the states of Sabah and Sarawak, while in Indonesia they are in the North, East, and West of the Provinces of Kalimantan. Habitat destruction has severely impacted a complete and accurate recording of their distribution through these forests.

Bornean orangutans have a wide variety of food that they eat, in fact, it is said that their diet consists of over 400 types of food. The diet is of is primarily herbivorous, however, they do eat the meat of smaller primates from time to time. They feed on foods such as wild figs, bird egg, insects, inner shoots of plants and vines, seeds, honest, banana, leaves, slow lorises and durians. On certain occasions, they have been seen as consuming soil.

The Bornean orangutan is classically known for its arboreal and solitary nature. Most of their time is spent lying in trees where they have built nests from leaves and branches, however, they do travel on the ground a lot more than the other type of orangutan known as the Sumatran orangutan – this is most likely because the Bornean orangutan does not face any large terrestrial predators.

The orangutan’s solitary nature is more evident in males. Females, although also solitary, are usually accompanied by one or two of their offspring. It is not uncommon to see two or three Bornean orangutans interact and be around each other for short periods of time. Males are also unlikely to interact with other males; they usually show threatening behaviors towards other males but are a lot more friendly with their female counterparts with whom they interact with when its mating season. Females can be known to interact with each other, but also for very short periods of time.

Orangutans are often compared to humans and celebrated for their intelligence, which makes it no surprise to see that they use tools in their daily activities. They use tree branches to test the depth of water or to poke at termite holes. They use leaves as tissues, sponges or even as umbrellas during the rainy season. They also use leaves to clean their food and collect water for drinking.

An important aspect of the mating process is that the two different types of males will have different results when looking for a mating partner. Both will use their strong vocalization to send out a sound known as a “long call” which can reach up to 3km (depending on whether they are flanged or not) to initiate the mating process. The flanged males will find a mating partner easier as females are usually more receptive to mating with this type of male. The unflanged males do attempt to mate with females but will not always be successful in this endeavor, at times the unflanged male is known to force the mating process by harassing the female. Both types of males will often look to mate with females that have weaned infants (these are infants not completely depended on their mother for food), the reason for this is that these females are more likely to be fertile.

The gestation period is 259 days. Newborn orangutans are fed often by their mothers, usually every 3 to 4 hours. During the first year of life, the infant will cling to the mothers by holding onto the fur on her stomach. The baby orangutan is weaned when they are about 4 years old but this could happen around 6 or 7 years old. Independence is usually at 7 years old. Female offspring are more likely to stay with their mother until their late teen years or when they are ready to have infants of their own, this is so that they can learn parenting skills from their mothers whom they observe taking care of their younger sibling. The interbirth period is very long, usually, orangutans only give birth every 8 or 9 years. The long interbirth period means that she only has a maximum of four offspring during her lifetime. The long interbirth period has contributed significantly to the decrease in numbers of the orangutan. Recent studies by the World Wildlife Fund indicate that the interbirth rate has been observed to be longer because of a lack of nutrients they are receiving owing to the loss of habitat and important food supply.

Are they not incredible, we and trust that you enjoyed the above article. We are continuously adding new content and would be greatly appreciative should you feel that you would like a specific topic discussed.

The Hluhluwe-Imfolozi Park is a 96000-hectare reserve situated in the heart of Zululand KwaZulu Natal South Africa. Home to the African Big 5, magnificent scenery and abundance of wildlife. Should you like to visit we offer a multitude of day safaris as well as overnight safari packages. Not only may one enjoy this the very first proclaimed game reserve in Africa but also venture into South Africa's very first world heritage site, St Lucia.