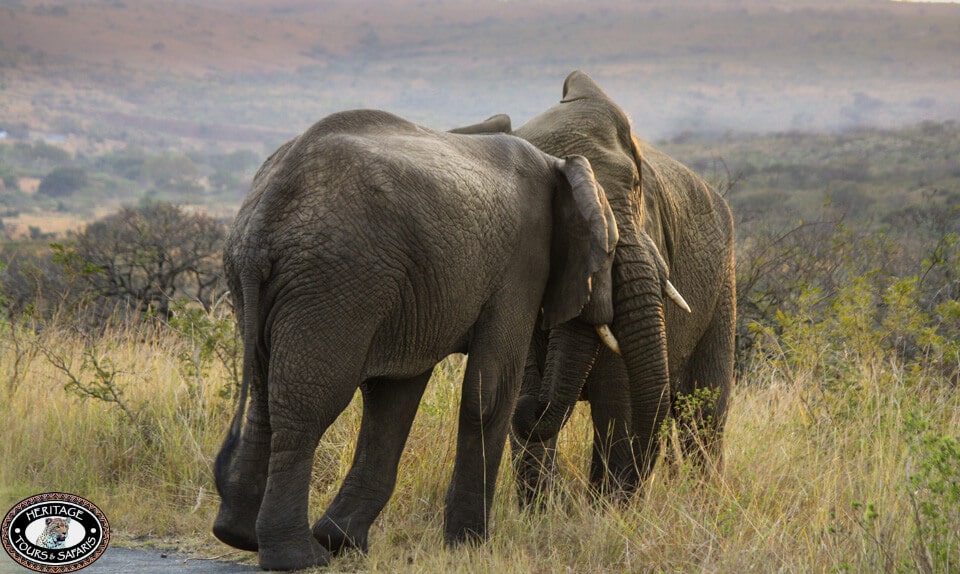 We’ve had some good rainfall over the past week and the bush is becoming a lush green maze dotted with interspersed waterholes throughout, this is a great time for seeing game . The morning was quite cold for this time of the year being mid-summer, so we found it to be a quiet start to the day with small groups of animals found resting along the way. After stopping for breakfast and hoping the day would warm a bit we set off to the far south area of iMfolozi, my guests wanted to see an Elephant herd and my guess was that this would be the area that I would possibly have some luck in finding them. Although Elephants are the largest land mammal in the world, they have eluded me many times before and are sometimes not easy to locate.
This particular area of the park is usually fairly dry, but since the recent rains it has attracted the likes of large Buffalo and Elephant herds. It wasn’t long before we came across some fresh looking dung and feeding signs in the form of branches that were stripped bare of their bark. Judging by the various sizes of dung balls and spoor I surmised that this was a breeding herd that had been in the area. It was a cool day so this meant dung wasn’t drying as fast and thus could sometimes make it hard to judge the age of the dung, but my guess was that it was from earlier in the morning. It was a narrow band of spoor and sign which disappeared after a few metres which meant that they had crossed the road, and moved down into the valley to the north of us.
Our hopes dropped a little seeing this but with some area knowledge and a bit of luck I was not yet throwing in the towel… so we travelled on. After about 2km I knew that there was a junction road heading north and this was to be my chosen route in the hopes that possibly the herd would continue with their trajectory and meet up with that particular road again. We took the junction, and as we passed the first bend in the road we saw our first Elephant. It was a large bull just walking up the road in the direction we were travelling. He was quite relaxed so we decided to follow him as sometimes we will find that these adult bulls follow the larger herds. He walked in front of us for a while before stopping for a scratch on the broken trunk of a tree, and then started feeding not far from us. As we were observing this big bull we heard the crackle of branches breaking ahead of us which was a good sign that more Elephants must be ahead of us!  One often hears Elephants before you see them as they are noisy when feeding.
The bush was thick and we could only see the movements of the large ghost like silhouettes but no clear visual until suddenly, a loud raucous trumpet next to us brought us to a halt. It was a young bull in his early teens. He was obviously startled by us and having no other Elephants in his immediate vicinity he did what every young bull usually does. He raised his head, spread his ears open in order to appear bigger and approached us. This is a typical intimidation technique practised by these young bulls. However not being too sure of himself he then rather opted to turn tail and ran back into the bush looking very foolish for initially putting on such a brave face.
What happened next left us once again in awe of not only the size but also the gentle nursing nature of these animals. We were then approached by a large adult female and a small crèche of youngsters that she seemed to be tending to at that stage, one of which was her own young calf who was still very young. She approached us with confidence with her trunk held high testing the air for our scent.

What was incredible to observe was the youngsters seemed to observe and them imitate her behaviour. 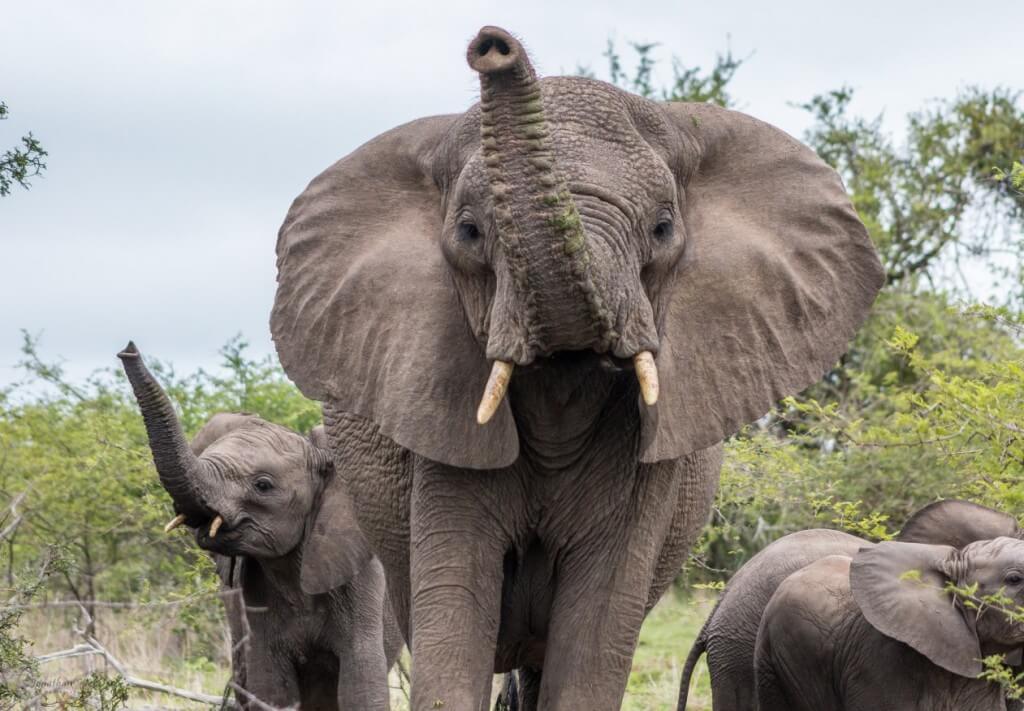 We know that young Elephants are taught and cared for by all females within the herd, but it was nice actually seeing this happen. She then started approaching us with her ears flared out but not in an aggressive way at all, she was only asserting her dominance. Once again the youngsters followed suit, it was as if she was showing them how to become a big strong Elephant. 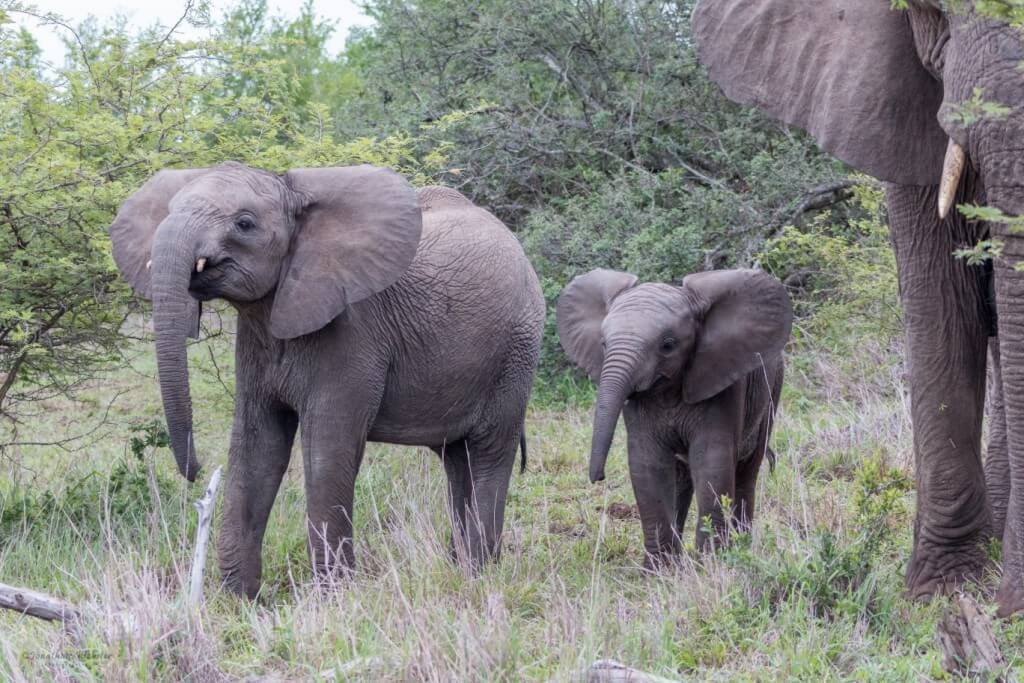 After the training lesson was finished she settled down, and with a few rumbles resonating from her trunk, she waited patiently for the rest of the herd to draw close before she started to move on across the road in front of us. We then had the pleasure of sitting quietly observing one of the best spectacles that the African bush has to offer, a breeding herd of Elephants feeding and playing all around our vehicle. Our day was pretty much made after that experience! 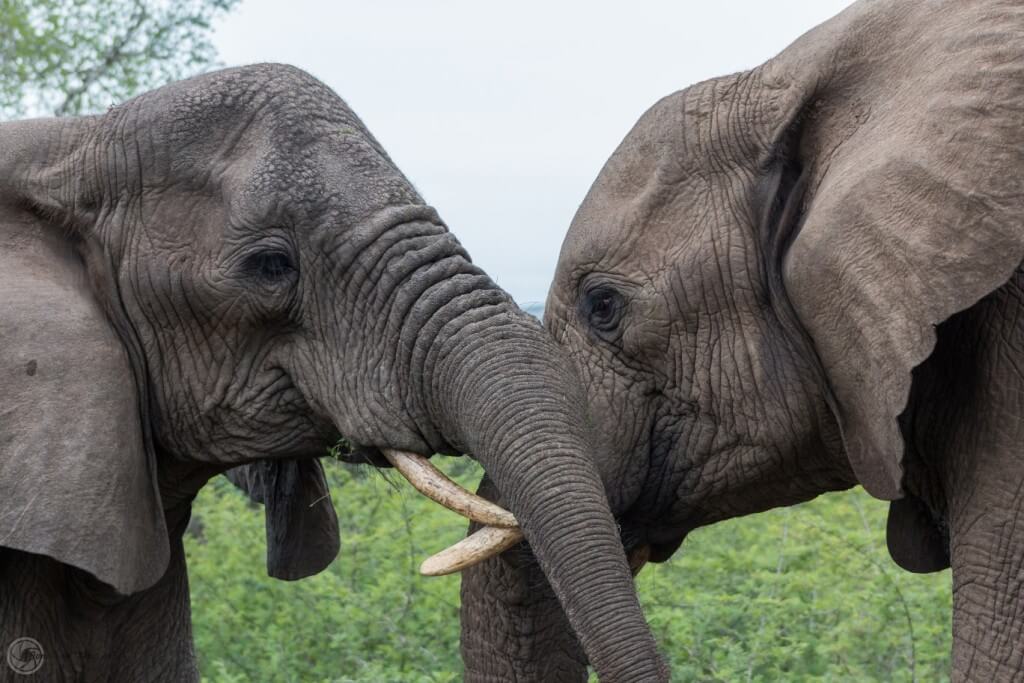 Heritage Tours & Safaris would like to invite you on one of our Safaris departing daily, we offer numerous outings and tours for more information please See our Day Safari Options or Overnight Safari Packages