The African wild dog is a canid native (a mammal of the dog family). Its scientific name, Lycaon pictus, literally means painted wolf – this comes as no surprise as the wild dog is known to share a common ancestor with wolves, although they are not genetically compatible.

As the only remaining animal of the genus Lycaon (endangered mammal's), it is known to have a life span of up 11 years. According to the Kruger National Park research, the average life expectancy has reached a point in which most only survive until 6 years old. Other names for the wild dog include, the painted dog. There are 5 subspecies of the wild dog however whether there is a clear and major genetic separation is an issue that has not been scientifically concluded. The subspecies are: The Cape wild dog, East African wild dog, the West African wild dog (Cape Hunting Dog), the Chadian wild dog and the Somali wild dog 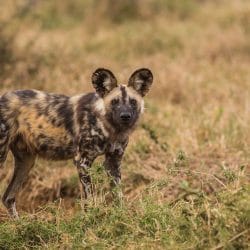 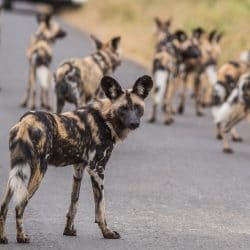 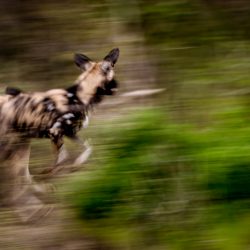 The wild dog can be distinguished from the canis, which is a genus of the Canidae consisting of wolves, dogs and coyotes. The distinction is evident from the teeth and claws. The wild dog has a degenerated last lower molar, narrow canines and large molars which assist in their hyper-carnivorous diet. The wild dog has a lack of dew claws and is known to have a shorter and broader skull than those of other canids, they are pack members.

The background regarding the true physical evolution of the African wild dog is not well understood or established because of the lack of fossil finds and documentation to indicate what the physical story of the wild dog is.

Currently, the African wild dog can be identified by their patchy coat that is usually a colour mix of brown, yellow, black and white. The coat colour can also be different according to the geographical location of the wild dog.

It has been found that wild dogs located in the North-eastern parts of Africa tend to be blacker with small white and yellow patches, while the wild dogs in the Southern parts of Africa are brighter in colour with a mix of brown, black and white coat. Each wild dog has a different coat pattern which makes it possible for each one to be distinctly identified.

Another interesting point about the coat of the wild dog is that it the coat patterns can be asymmetrical with the left side of the body often having different markings from that of the right. The patterns on the coat exist predominately on the trunk and legs.

White is a prominent colour on the wild dog - some wild dogs have white patches behind the front legs, while others can have front legs, chests and throats that are all white. The wild dog has no under fur but has stiff brittle hairs. It is common for elderly wild dogs to be look ‘naked’, this is because the wild dogs lose their hairs as they age.

When it comes to the length and body mass of the wild dog, some research has found that females can be slightly larger. The females have been found to reach a body weight of up to 34 kg, while the males weigh between 20 kg and 30 kgs. It has also been identified that the Southern Africa wild dogs tend to be heavier, weighing mostly in the 30 kg region while the smaller Eastern ones weigh between 20 and 25 kgs. The head to tail length of the wild dog is approximately 1,22 m.

Other physical aspects of the animal include large rounded ears that stand up like radar dishes; a bushy tail that is usually white at the tip, black in the middle and brown at the base; four toes on each foot which differs from other canid species that have four toes on the hind-feet and five toes on the forefeet; specialized molars that are able to shear through meat and break bones; long legs; and brown tear-drop shaped mark below the eyes.

A special part of the wild dog is the high stamina it possesses, it is able to run a maintained speed of up to 40 km/h in a 5 km distance and can increase to 60 km/h when running shorter distances. The wild animal has a strong sense of sight, hearing and smell. It can pick up the quietest of sounds and can see as far as between 50 m and 100 m.

Wild dogs prefer forested areas, dense bush areas and open plains, they are rarely (if ever) found in rainforest areas and deserts.

The painted dog is considered to be a nomadic creature which makes it difficult to get a near & accurate estimation of their distribution. This trait also means that their territorial range can be between 400 and 1500 square kilometres . The animal has recently started to decline in numbers meaning a low population of them that can be found.

The wild dog is considered to be nearly extinct in North Africa, West Africa and Central Africa.

Popular places to find large populations of the wild dog are: the popular South African game reserves of the Kruger National Park and Hluhluwe Game Reserve, the Zambezi and Hwange National Parks in Zimbabwe, the Okavango area in Botswana and the Selous National in Tanzania.

The avid carnivorous hunter is a fan of small to medium animals. The impala is the favorite prey of choice for the wild dog with 80% of their diet consisting of the impala. Other food choices include birds, porcupines and rodents. The food choices, like the physical aspects, can differ according to the region and season. Despite being smaller, the wild dogs in East Africa prey on larger prey such as wildebeest, zebra, reedbuck and kudu. In some areas, like in Zimbabwe, they feed on livestock. Wild Dogs do

Wild dogs love spending time with each other (incredibly social animals). The best way to describe the wild dog’s social behavior is through their ‘pack’ structure. The bonds of wild dogs as packs are known to be stronger than those of lions and spotted hyenas. The individual wild dogs exist within a ‘pack’ (or team) with a strict hierarchy. A pack can be anything between six and twenty wild dogs, in some instances there can be fifty wild dogs in a pack.

The pack includes (living in packs) an alpha male and female (Pack Members) who are the leaders of the pack, their pups and other subordinate adult wild dogs. In the South Africa, like the Kruger, a pack size can be made of four or five adults, while In Tanzania they are usually eight or nine adults in the pack. An important part of survival is dependent on how close they remain to their pack. Males stay in their pack’s territory until reaching sexual maturity, even then they are most likely to remain in the pack then leave. This differs from females who will leave the pack once maturity is reached in order to seek out a mating partner. Males typically outnumber the females in a ratio of 3:1.

The role of the alphas is to lead the pack while the subordinate wild dogs, particularly the females, play a supportive role in the social structure. This is especially apparent when mothers are nursing. When a female in the pack is nursing, the subordinate female assists in providing the nursing female and her pups with food.

The hunting process is done at either sunrise or sunset in packs which make them effective predators. The process of hunting involves the wild dogs performing an intricate greeting ceremony which includes them sniffing and licking each other, twittering out loud and wagging their tails.

The “hoo” made during this ceremony can be heard as far as 4 km away. After the ceremony, there is a silence as they embark on the hunt. The subordinate male usually beings the hunt by attempting to isolate the most vulnerable animal from the rest of the herd that they are targeting, usually this is the youngest or smallest. Once this has been done, the alpha male wild dog (dominant wild dog) takes over and leads the hunting chase. During the chase the pack splits up with half forming circle and other attempting to drive the prey towards the circle until its exhausted. When successful in this, they being to tear it apart.

If they are unable to get the prey to head towards the circle, they alternate with each other while increasing their pace and attempting to tear at the prey to slow it down.

They are also considered to be orderly and restraint when killing the prey and when eating it. There is an order according to the hierarchy when eating. Usually the young wild dogs eat first followed by the subordinate females and males, the alphas male and female of the pack are free to eat at any time. Each dog knows to wait for its turn to eat. If the food runs out, they hunt again. The painted dogs are long distance travels, they are able to travel over 50 km per day looking for food. 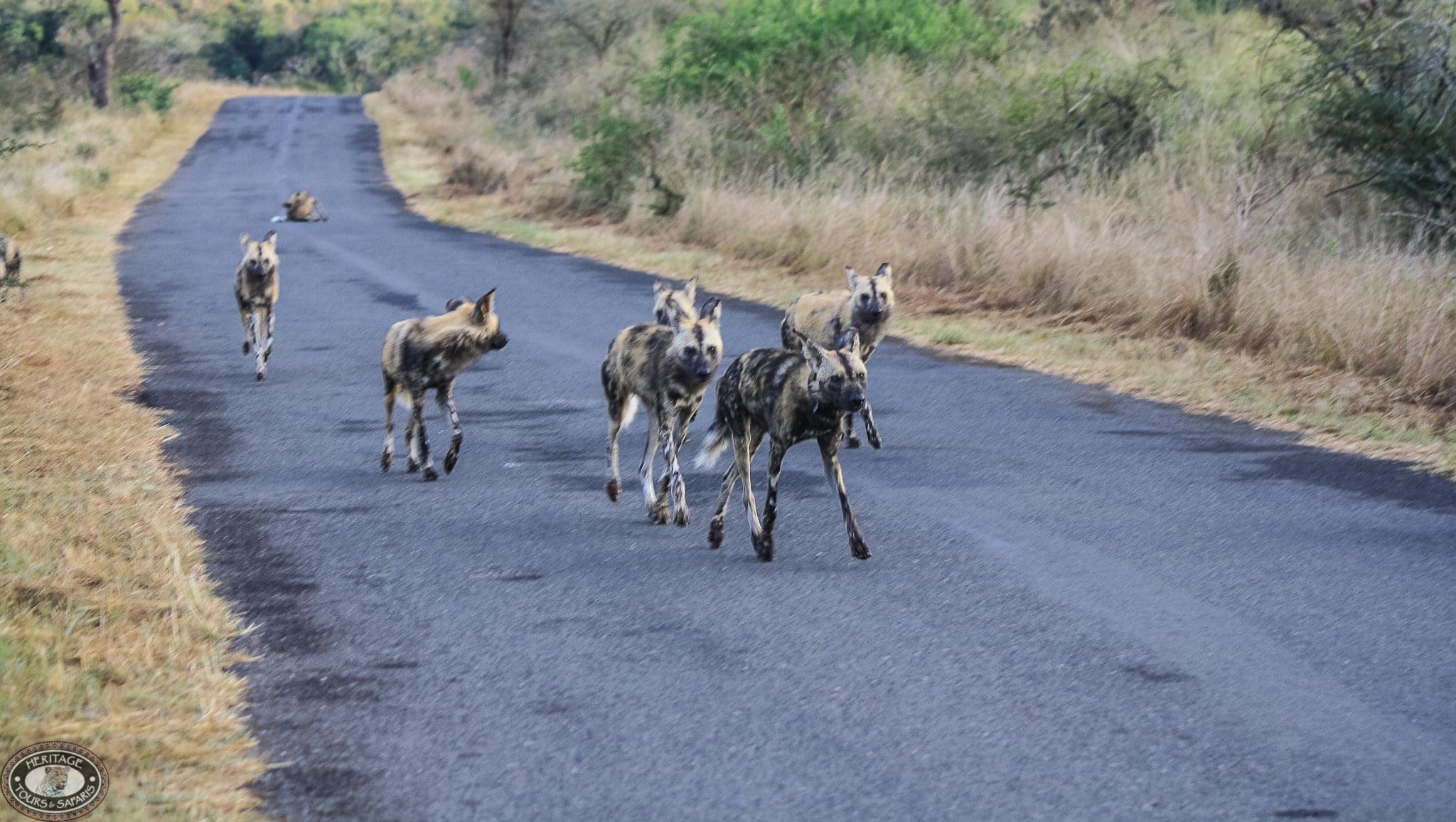 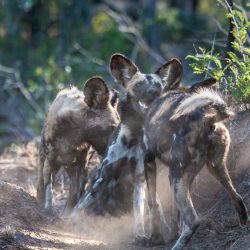 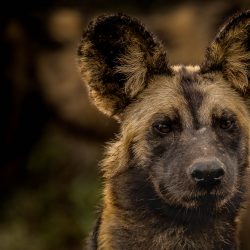 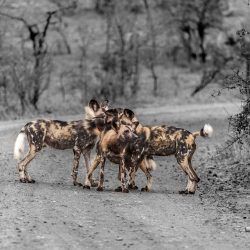 The wild dog male and female is typically sexually mature after 23 months (reach maturity)(breeding pair). The alpha pair is the only one in the pack that is capable of breading. Other members of the pack act as helpers. This social system can lead to the other females suffering from reproductive depression because of the limited resources, patterns of behavior and the endocrine mechanism.

Wild dogs are seasonal breeders. Births usually happen between April and September; however, this generalisation is more evident in Southern Africa than it is East Africa. In South Africa, the wild dog pups are born in the middle of winter after a 70 to 73-day gestation period (which is the standard gestation period).

There is usually an interval of between 12 and 14 months between each pregnancy. An average litter size of puppies is between 4 and 12. Wild Dogs also regurgitates food (meat) for their litter.

After birth, the litter of puppies stay in dens/burrows for safety reasons. Interestingly enough, they are actually born blind. They also don’t feed off of only the female’s milk for too long. Three weeks after birth, the milk is given to them with regurgitated from their mother or other subordinate females.

The feeding is usually for the first 3 months before they are taught to hunt. The young usually begin to take adult appearance 7 weeks after birth, shortly after this (between eight and ten weeks) they leave the den/burrow.

Heritage Tours & Safaris departs daily into the Hluhluwe-Imfolozi Park, we would be delighted should you join us on one of our Big 5 Safari Tours. The company offers Full or Half Day Safari Options.